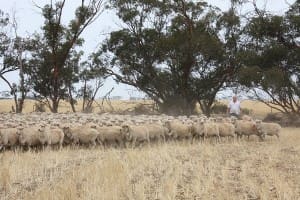 Sheep are winning new friends in the cropping zones of Victoria and New South Wales.

With high lamb prices and the need to control herbicide resistant weeds, croppers are boosting their flock numbers or investigating lamb finishing.

Birchip Cropping Group’s livestock co-ordinator Danielle McMillan said with cropping having “gone as far as it can”, farmers were starting to focus on better integrating sheep into their operations.

“It is becoming a real focus.”

Sheep numbers are starting to lift in the region and factors such as herbicide resistant weeds and the need to graze stubble over summer were also working to lift sheep numbers, she said.

“Compaction isn’t really an issue anymore on our soil types.”

At the BCG’s Sheep Management Showcase last week she said livestock membership of BCG had grown over two years to about 100, representing a quarter of the group’s total members.

The showcase focussed on refining livestock systems to achieve production outcomes, she said.

Croppers were also becoming interested in livestock as a result of BCG extension and trials.

“It is really starting to pick up.”

“There are great efficiencies that can be gained through a few management changes or upgrading technology and infrastructure,” Ms McMillan said

She said croppers with sheep were more willing to take invest in new technology once they see the efficiencies it made possible.

“We are seeing more croppers changing their enterprise mix with a little bit more emphasis on sheep.

Traditionally it has been somewhere around 30 per cent sheep, now it is creeping up a bit,” he said.

“You still have your pure croppers, but the reality is to diversify your enterprise and manage risk you do need to have something else in place.

“At the moment with the price of lamb it appears that it is lamb they are moving to,” he said.

“The lessons of the dry times have probably taught them to be a little bit more diversified.

“It is only now that sheep are starting to look more profitable that they are seeing they could come back in,” he said.

“When you put lambs and wool together you have got a pretty profitable unit now.”