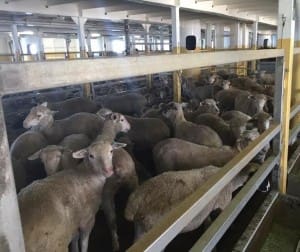 Sheep on the MV Ocean Outback.

SHEEP taken off the troubled live export vessel MV Ocean Outback in Western Australia will either be slaughtered locally or exported at a later date.

The vessel was loaded with 7426 feeder sheep and 5614 feeder cattle destined for Israel late last month, but it experienced mechanical issues in the port of Fremantle on December 29 prior to departure.

Following inspections by WA, federal and RSPCA veterinarians late last week, the sheep on board were discharged and transported to a pre-export quarantine feedlot. No concerns for the welfare of the animals were identified and they were found to be in excellent condition, the Department of Agriculture and Water Resources said.

The department conducted a Biosecurity Risk Assessment and issued an import permit for sheep on board the vessel, which required that the sheep be moved to a registered premises and kept isolated from the national livestock herd.

There were no injuries or mortalities during unloading and transport of the sheep to registered premises. However, over the past 10 days three cattle and 30 sheep died on the vessel.

The MV Ocean Outback departed Fremantle at 5.20 am on January 10, operating on one engine, and the department said it would continue to monitor the situation in line with its regulatory responsibilities for the export of livestock.

The cattle will be supplied to a regular buyer of Australian cattle who is accredited with the Exporter Supply Chain Assurance System (ESCAS).

Wellard chief executive officer Mauro Balzarini said the WA and Federal Governments and agriculture departments have been very responsive and supportive to expedite a solution.

Wellard said the M/V Ocean Outback was constructed with a dual independent propulsion system, so can safely operate on one of its two engines. It has previously completed a number of successful short voyages using a single engine, without impacting on voyage success rates.

RSPCA Australia issued a statement last Friday stating its “serious concerns” about the ongoing welfare of the sheep and cattle on board the MV Ocean Outback.

“We are aware that current contingency plans for the livestock include unloading the sheep at the port of Fremantle to be either sold to a domestic processor or re-exported at a later stage, and for the cattle to be shipped to a market in South East Asia on the same malfunctioning vessel early next week.

“We welcome the possibility for the sheep to be slaughtered here in Australia to Australian standards,” the RSPCA statement said.

“We would be extremely concerned if the sheep were to be re-exported at a later stage.

“They have endured enough already and should not be subjected to stress of another sea voyage and the trauma of undergoing unstunned slaughter in the Middle East.”

The cattle would have been onboard the Ocean Outback for two weeks by the time they finally depart for South East Asia, and under the power of a single engine, it is likely to be a long journey, the RSPCA said.

“This is a wholly unacceptable situation and again demonstrates the inherent and unavoidable risks of the live animal trade.

“We strongly encourage the exporter to put the animals’ welfare first in making further decisions about the future of the 13,000 animals involved.”

The RSPCA also called upon the Australian Government to “seriously consider the merits of transitioning to a more stable, sustainable, and ethical trade in chilled and frozen meat processed here in Australia to Australian standards.”