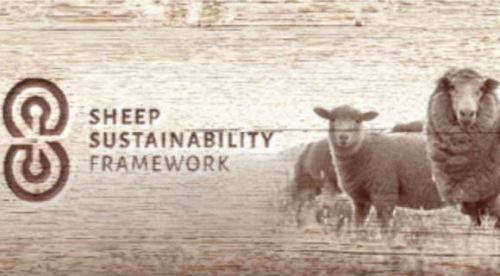 AUSTRALIA’S sheep industry released its first annual report on sustainability today and already producers are seeing the potential for documenting the sector’s progress in key areas.

The first annual report of the Sheep Sustainability Framework was released at the Australian Sheep and Wool Show in Bendigo, delivering on the world-first commitment of the Australian sheep and wool industry to create a data-driven yearly snapshot of sustainability performance.

“I’d like to identify on the meat side, how our competitors, both in other meats an internationally, are performing in comparison to us.

“And on the fibre side, the same story, what are the other fibres doing and what are our international wool competitors doing as well.”

Mr Wootton said he realised it was not necessarily the framework’s call to generate do the comparisons, but he said the industry needed to have an eye on its competitors, “because that what consumers will be looking at.”

“I think this is a good beginning, I’m very supportive, and the challenge for all of these things is having good robust data that is ‘challengable’ but having enough of it there, and that is partly the challenge for the industry.”

SSF Sustainability Steering Group chair and livestock veterinarian, Dr Scott Williams, said generating the data on overseas industry is not currently the responsibility of the SSF, but he said Australian Wool Innovation is doing a lot of work on the environmental footprint of wool.

Dr Williams recognised the value in being able to make comparisons between sheep meat and wool industries in different countries, but was not sure the required data is available.

WoolProducers Australia president Ed Storey also agreed there was value in knowing where Australia’s sheep meat and wool industries stood against its competitors.

“One year’s or two year’s data is a snapshot in time, but up to six year’s data starts to reveal a picture, a trend, and the quality therefore of the evidence starts to improve as we become more sure of the metrics and more sure of how we are collecting our data, and then we will be able to compare with others.”

Mr Storey said one key theme of the framework is transparency.

“We are seeing a lot of sustainability claims in the world at the moment.

“Are we as an industry perfect? No, we are not, but we are going to have a crack of it.”

He said the industry will be able to use the framework as a suite of evidence to compare itself with others in time, especially with more data collected in coming years.

The framework is led by Sheep Producers Australia (SPA) and WoolProducers Australia (WPA), with four themes: caring for our sheep; enhancing the environment and climate; looking after our people, our customers and the community; and ensuring a financially resilient industry. Within those themes are nine focus areas and 21 priorities – monitored and measured by 58 data-driven indicators.

Dr Williams, said the annual report creates an important foundation for the sheep and wool value chain and its stakeholders.

“This is a major milestone for the Australian sheep and wool industry.

“We are now one of the most transparent sheep and wool industries as well.

“From reducing greenhouse gas emissions and climate change adaptation to animal husbandry practices and on-farm safety, the annual report is a documented baseline on how we as an industry are performing.”

The annual report showed that rates of ground cover have improved with 63.4pc of sheep-grazing land achieving over 50pc ground cover since summer 2019 – a 13pc increase on the previous year. The industry also continues to invest in seeking new and innovative ways to assist the red meat industry meet its target of carbon neutrality by 2030 (CN30) and help Australia reduce its overall greenhouse gas emissions.

Worms and breech flystrike are among the most important health challenges for the industry and genetic improvement is a means to prevent disease, with a key measure of success being the change in Australian Sheep Breeding Value (ASBV) over time – specifically Worm Egg Count (WEC) and Early Breech Wrinkle (EBWR). A reduction of 10pc in WEC ASBV and 15pc in EBW ASBV in the latest reporting period indicates that flock resistance to worms and breech flystrike is increasing.

The report also indicated the industry is trending away from mulesing, with a directional increase in non-mulesed and ceased-mulesed wool as a proportion of the total clip recorded from National Wool Declaration results in FY2021. More definitive data will be released in the mid-year update of the annual report including the percentage of producers who mules Merino sheep and non-Merino sheep.

Independent Chair of the SSF Board and sheep producer, Lucinda Corrigan, said the annual report was an evolving document with more indicators under development, but the inaugural edition already contains a number of firsts.

“In order to be able to create the data needed for the annual report, we undertook a Life Cycle Assessment of the entire Australian flock to determine the carbon footprint of our industry.

“The deep insights generated from these projects represent an important development in our understanding of the impacts on and of our 234-year-old industry.”