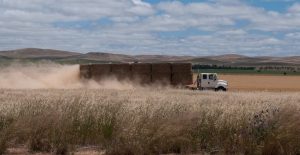 Hay is on the move as dry conditions continue.

DRY autumn conditions across much of Australia have sparked a rush on fodder supplies for the first time in a few years, especially from sheep producers, and it is driving hay prices upwards.

Australian Fodder Industry Association chief executive officer, John McKew, said 2016 and 2017 had been very strong, buoyant years for fodder production with subdued demand and low prices, but that had turned around dramatically in the past month.

“Over the last four weeks the fodder market has become a very hot market as seasonal conditions around the country have been less than favourable for autumn breaks and pasture growth,” he said.

“It is now the middle of May and on the cusp of winter and we haven’t had a substantial break.

“We are not sure when we are going to get rain. It is going to get cold sooner rather than later and people probably don’t have a lot of feed left and are starting to looking for some. So, the fodder market has become very buoyant very quickly.”

Mr McKew said the oversupply situation in 2016 and 2017 meant there had been high starting stocks and there was still a significant supply available.

“We are not in a position at the moment where the situation is critical on supply. If you look around the western districts of Victoria and into South Australia there is still a lot of hay available in those regions,” he said.

“There are a lot of hay trucks moving around the country, particularly out of the high-supply areas,” he said.

“From south-west Victoria there are trucks going into Gippsland and up into NSW.”

Mr McKew said while there was still plenty of supply, there were some hay producers who probably had hay and were sitting back watching prices firm.

“Prices haven’t gone berserk, but they have certainly firmed and will continue to firm.

“There are some people with hay who won’t put it on the market yet because they reckon there is still some movement in price. If they hold off a bit longer and the weather doesn’t provide any substantive breaks they think they might make another $50/tonne in another week or fortnight,” he said.

Mr McKew said top-quality cereal hays were getting harder to find and protein hay was almost impossible to source.

“Lucerne and vetch is very hard to find. There will still be pockets here and there, but high-quality protein hay is increasingly difficult to find at the moment,” he said.

“There is still a lot of lower-grade quality hay available.”

Mr McKew said there remained a reasonably good supply of carry-over stocks of low to medium-grade hay in the system in WA, but he urged buyers to exercise care and have the hay feed tested if they had any concerns.

He said demand for carryover hay from northern WA beef and sheep industries was strong and was expected to continue.

Mr McKew said the export industry in WA continued to dominate that market and was a solid indicator of pricing.

“Exporters are continuing to seek out quality hay and, as a result, set the price in the market.

“A lot of the exporters have good supply, but they will be out in the market and starting to become more active,” he said.

Demand for hay across the NSW tablelands 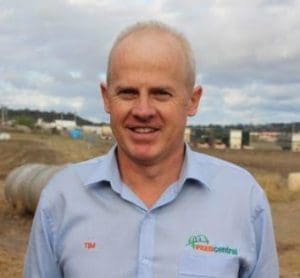 Feed Central managing director, Tim Ford, said the dry autumn had seen a lot of hay sold, but there were still supplies at this stage.

“Cereal hay is the main game these days.

“It is being transported big distances, but that is not uncommon for us,” he said.

“Feed Central does that every day of the week, 52 weeks a year.

“The intensity is a bit unusual, but putting hay on trucks and taking it big distances is no longer extraordinary for us,” Mr Ford said.

Mr Ford said there was particularly strong demand from the intensive livestock areas along the western side of the Dividing Range in New South Wales where they had missed their autumn break and conditions had turned cold.

He said, unusually, there was demand for fodder from sheep producers this year.

“In our 15 years of operation, we haven’t seen volumes of hay for sheep.

“It is different this time around; it is based on the good prices for wool and the animals which has meant there has been demand from the sheep producers,” he said.

“It is essentially a niche product since water has been priced. Over one or two decades irrigation water has moved away from lucerne.

“The area under lucerne has decreased and the areas under cotton, horticulture, almonds, tomatoes and olives have all taken water that would have once gone to Lucerne,” he said.

“It has been replaced with dryland cereal hay and vetch hay,” he said.