In a statement released this morning, Sheep Producers Australia said it has endorsed a change in the industry definition of lamb to be the same as the New Zealand definition, based on a formal, industry-wide call for feedback.

The new definition, as outlined in the New Zealand Lamb and Mutton Carcass Classification, will be ‘young sheep under 12 months of age or which do not have any permanent incisor teeth in wear’. 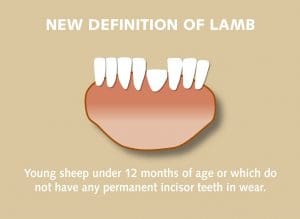 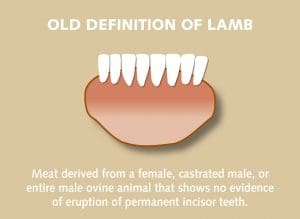 SPA said the decision was based on the majority of feedback provided during a nine-week public consultation phase in which 83 percent of respondents to an industry survey supported the change.

All responses have been collated by an independent service provider into a summary document. In addition, SPA has addressed any concerns raised through the consultation in a separate policy paper.

Mr Piggott said, in addition to industry feedback, the SPA board also relied on science and data in endorsing the change to a uniform industry position on the lamb definition.

“The SPA board has endorsed an evidence-based policy position that reflects what the majority of Australian sheep producers want as a result of an in-depth and transparent public consultation process.

“The new definition will even the playing field against New Zealand in our export markets and provide producers with an indicator before they incur the ‘price cliff face’ of lamb being downgraded to hogget or mutton,” Mr Piggott said.

“The current definition means that as soon as eruption is evident, the animal becomes classed as mutton, and results in a lower price.

“Market access risk from adopting the New Zealand lamb definition was proven to be minimal,” he said.

“Upon advice from MLA’s consumer markets insight unit, as there is no anticipated change to eating quality of the product, the likelihood of a detrimental effect on consumer preference is low,” Mr Piggott said.

“The public consultation and associated independent report ensured the policy decision made by the SPA Board was made on objective and transparent information.

“The independent summary of public consultation on the lamb definition review and accompanying final policy rationale is publicly available on the SPA website.”

Mr Piggott said the next step was for SPA and industry stakeholders to work through the development of an implementation plan, given the lamb definition is currently defined in various federal, state and industry regulations and standards.

The lamb definition review is part of the broader ‘Fit for Purpose Language Program’ being undertaken by SPA. The program aims to enable the introduction of meat and livestock specification language that strengthens the connection between consumer price signals and on-farm decision-making. Enhanced alignment will assist in producers being paid for the product attributes that consumers value most at the dinner table.

To find out more about the lamb definition changes, download the following background documents: