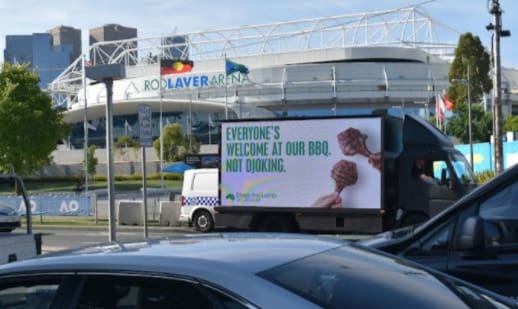 Visa issues aside, everyone is welcome at a lamb barbecue, says MLA.

LAMB marketing has gone guerrilla at the Australian Open and it’s a winner for producers and retailers.

MLA domestic marketing manager Graeme Yardy said the truck-mounted posters were a very tactical guerrilla activity, designed to get a bit of extra media coverage beyond the main launch of the Summer Lamb ad campaign.

“It’s very low cost and it just keeps the conversation going about the campaign.

“It actually gives you a lot of flexibility, rather than have a billboard that’s stuck to a building or on a freeway,” he said.

“We want pedestrians to see it, so the strategy was to give people walking into Melbourne Park for tennis a bit of light entertainment, take a photo of it and share it, those sorts of things.”

The same tactics were used in last year’s campaign during Australia’s state border COVID issues that boosted lamb sales by 14 percent at a higher average retail price, helping the ‘Make Lamb Not Walls’ advertisement win the ‘TV Ad of the year’ and ‘Ad Campaign of the Year’ at The Mumbrella Awards last year. 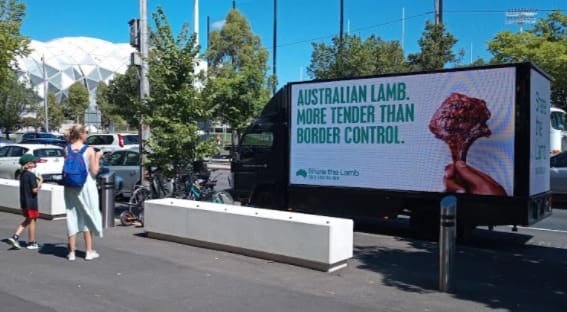 It’s hard to connect media coverage with actual lamb sales, but in the wake of Mr Djokovic’s departure and as Western Australia maintains its hard border, Mr Yardy said there has been good coverage of the mobile posters in national media, along with repostings of the Summer Lamb ad.

“That was the main point of it, just to slip something in there, get people talking about it again and keeping the campaign top of mind.

“But we sort of trade on this right through the year … we get some good associations from it in people talking about lamb,” Mr Yardy said.

“If you don’t hold a position in minds the slippage over the long-term can really hurt you.”

Mr Yardy said although lamb had a solid base of Australian consumers, MLA recognised it had to do things differently to attract new buyers, and as COVID restrictions eased, this would include taking advantage of lamb’s current “on-trend’ status in food service.

Mr Yardy said “definitely Novak had no idea” he was going to be enlisted to help lamb sales along.

“Obviously as the story was happening over about 10 days we were sort of strategizing, working on a few lines and obviously organising the truck to happen.

“The good thing about it is the truck (screen) is a digital execution so you had right up until like the day before to finalise the lines and that’s what we went with,” he said.

“We thought that was the most appropriate for the situation.”

But had Djokovic’s visa dispute with the Federal Government not eventuated, the campaign was ready to seize other opportunities. Mr Yardy said MLA always kept a portion of its Summer Lamb aside to “jump on any activities.”

“We’ve learned over the years that people like a few extra surprises and it keeps the momentum of the campaign going over the time,” he said.

“We don’t people just to see it when it launches and then you don’t see it for the rest of the campaign.

“We want people to be constantly thinking about lamb and taking up the key message for the five to six weeks of the key Summer period.”

“We definitely threw a lot of lines around and some were funnier than others and some didn’t work because they didn’t talk to the situation.

“But also some didn’t remind us what the campaign is about; getting people back together.”

And on that theme maybe some of my suggestions for posters reading: ‘Code Red for Lamb’, ‘Make close contact with a lamb chop’ or ‘Have a random lamb fest today’ might not have cut it. Though Mr Yardy did say, albeit tongue in cheek: “I think you’ve got a big future in advertising.”

Mr Yardy said the guerrilla campaign will be ongoing.

“There is definitely time to do a bit more, when we filmed the ad we had a few bits and pieces up our sleeve that we really like.

“So you never know, we might have a few more things to show.”

Though I can’t help but think one opportunity was lost. At some stage, tapping into the Aussie disdain for those who try to put one over on us there could have been a truck poster that read: ‘Give Novak the chop’.

A sheep shot, but maybe there’ll be a next time if he still wants to be the first man to win ten Australian Opens and secure 21 Grand Slam crowns.