Agriculture Victoria has backed away from reports of potential staff cuts, claiming it is conducting an internal review of research that doesn’t attract co-investment.

AV has said any changes will be made in full consultation with its staff and the Community and Public Sector Union; however, Sheep Central believes some staff had been told their positions were at risk or under review because they had attracted insufficient co-investment.

Minister for Agriculture Jaclyn Symes has declined to issue a statement on the issue. Sheep Central has been told that no research staff have been told their positions were redundant, but that talks had been held with some Agriculture Victoria team members potentially affected by proposed changes.

However, Mr Leeming, the former chairman of the Southern Australia Livestock Research Council’s western Victorian regional committee, believed earlier this week that some Agriculture Victoria research staff had been “given their marching orders”, potentially impacting future research at the AV Hamilton centre. 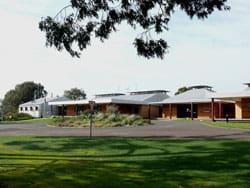 “There needs to be some questions asked about the imbalance in spend between commodities and who is actually pulling the strings in relation to allocations of investment and co-investment across dairy, grain and meat research.”

He believed Ms Symes should be invited to tour Agriculture Victoria’s Hamilton Centre to look at the facilities and talk with producers.

Mr Leeming said sheep meat and wool producers should consult heavily with the Victorian Government on the direction of investment and co-investment into research, development, adoption and extension in red meat, wool, sheep and beef areas.

“I worry as do many producers across the state that there has been a deliberate dilution of resources into our industry.

“How we structure state, levy and private moneys into the future is vital for viability of our products,” he said.

An Agriculture Victoria spokesperson said the division was “listening to farming businesses, reviewing research that doesn’t attract co-investment from industry, while we grow research and innovation initiatives that have strong industry support – to boost our farming sector and create jobs.”

“Agriculture Victoria is considering adjustments to its operations so it can best respond to emerging science and technology innovation and deliver world-leading research for Victoria’s agriculture sector.

“Any changes will be made in full consultation with our staff and the Community and Public Sector Union,” the spokesperson said.

“Victoria is leading the nation in agriculture research and it’s important that we focus our efforts on what our farmers need to thrive for decades to come.

“Our research projects are designed, developed and delivered with industry, producing timely, relevant and accessible innovation for Victorian agriculture.”

Mr Leeming said as a producer and a SALRC regional committee member he believed any Agriculture Victoria cuts were short-sighted.

“We’ve been so fortunate in Victoria to have that independence of research – with private government researchers working together and sharing.

“I think it is very short-sighted in that sheep and red meat has been the biggest agricultural earner for Victoria in recent times and probably will be for the near future,” he said.

“If you think of a pasture analogy, you are cutting heaps of hay or pasture off a paddock but you are not replacing the nutrient that you are taking off – it’s as simple as that.

“You can’t just take with one hand and not give back,” Mr Leeming said.

“The public purse is so much better off with red meat and where it is at the moment and to lose the independence in research and development is very naïve and extremely short-sighted.”

“We know that south-west Victorian has the highest concentration of production of red meat in Australia and the AV Hamilton centre, formerly known as Hamilton PVI research farm, has conducted some of the most long-standing and worthy sheep and beef research projects over decades.

“That has benefited the industry hugely and farmers, agriculture and red meat in general will suffer by not having that investment from the state purse, but also co-invested research and development – whether that is private or levy-funded organisations to work the state government to put the nutrient back in the paddock.”

Deliberate ‘death by a thousand cuts’

Mr Leeming said he hoped farmers would be given an opportunity to consult with the Victorian Government on any proposed RDAE staff changes.

“There has been a deliberate death by a thousand cuts in this space,” he said.

“The PVI research farm in Hamilton used to be one of the biggest employers at Hamilton 20 years ago and the offices are empty now, rather than full; it’s like a ghost town in there.”

“What a waste of money that is and I thought it was going to be rejuvenated.

“With the rise of sheep meat exports in the last five years and the massive contribution it is making to the state purse, we were very excited when that red meat centre was opened,” Mr Leeming said.

“And south-west Victoria is a super-important good paddock that needs to be well-fertilised.”

Mr Leeming said he would be taking up the issue with the other SAMRC regional committees, and the State Government-run BestWool BestLamb and BetterBeef networks.

Agriculture Victoria employs more than 1100 people across 50 sites throughout regional and metropolitan Victoria.