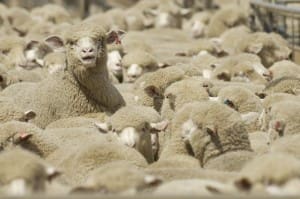 Australia’s sheep numbers fell for the second consecutive fiscal year in 2013-2014, but the average farm cash income of lamb producers rose 24 per cent, according to ABARES Australian lamb: financial performance of slaughter lamb producing farms, 2011-12 to 2013-14.

The report said during 2009-10 and 2010-11, the Australian sheep flock went through a rebuilding phase, as many lamb producers had favourable weather conditions, with numbers reaching 75 million head at the beginning of 2012-13.

But despite a return to favourable conditions in the first half of 2014 across many lamb producing regions, most had below average rainfall in the first half of 2013-14, and producers continued destocking, leading ABARES to estimate the national flock at 70 million head, with adult sheep sales increasing five per cent and lamb sales around four percent.

“The favourable seasonal conditions during the second half of 2013-14 did see a six percent increase in ewes joined and an eight increase in the total number of lambs marked, and, at the conclusion of the fiscal year, lamb meat production reached 471,000 tonnes, up three percent year-on-year,” ABARES said.

For average slaughter lamb producers — those that sell more than 200 lambs per year — the rise in farm cash income in 2013-1014 was due to an increase in receipts for sheep of six percent, 14pc for lamb and 11pc for crops, compared to the previous year, while cash costs have remained steady with 2012-13 levels.

The 2013-14 increase in farm cash income was evident in all states except Tasmania.

ABARES estimated NSW producers earned an average farm cash income of $144,000, up eight percent, except in northern NSW where incomes were estimated to have fallen due to lower grain receipts as a result of dry conditions. The Victorian income average was $138,000, up five percent; South Australia’s was $244,000, up 33pc; Western Australians averaged $366,000, up 78pc, and; Tasmanian producer average incomes dropped three percent to $131,000 – all of which are above the ten-year average.

ABARES said the farm cash income average in South Australia increased by $60,200 from more grain production, while the Western Australian average was $160,500 higher as a result of better lamb, sheep and wool prices. The $4000 fall in average farm cash income for Tasmanian producers was attributed to a decline in crop, wool and adult sheep sale receipts.

For the full ABARES report, which was commissioned by MLA, click here: Financial performance of slaughter lamb producing farms 2011-12 to 2013-14.