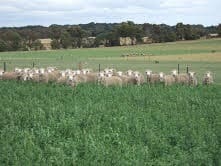 Producer participants are being sought in Victoria and southern NSW for a ewe nutrition demonstration program.

Victorian research has found that flushing ewes with green feed for one week prior and one week post joined delivers impressive reproduction benefits.

Department of Economic Development, Jobs, Transport and Resources (DEDJTR) livestock extension officer Gervaise Gaunt said flushing on green feed increased the number of ewes pregnant by up to 13 percent, with an average increase of four percent over the 16 sites that showed a positive conception response to green feed.

The number of potential lambs due to multiple ovulations increased by up to 33 percent, with an average of 15 pc extra foetuses scanned per 100 ewes over the 19 sites that showed a positive scanning response to green feed.

On farm demonstrations across NSW and Victoria have shown that short term flushing ewes with green feed such as lucerne, rape, millet or green pasture increased lamb production.

Ms Gaunt said over the past two years DEDJTR had conducted demonstrations on 22 producer sites.

“The demonstrations required joining Merino or crossbred ewes in February and March for a winter/spring lambing,” Ms Gaunt said.

“Implementing a simple but effective grazing management strategy can provide a short term flushing effect, which can generate increased lamb production and income through reducing the proportion of dry ewes and increasing the rate of multiple births.

Participants would need to make available 250-300 ewes for each of the above treatments, or 750-900 ewes in total.

Ms Gaunt said DEDJTR will supply 900 electronic tags, even if ewes were already tagged, meaning the tags could be used on other sheep, such as the new lamb drop. DEDJTR will assist producers with data collection.

If you would like more information or are interested in being involved in the demonstrations in 2015 and or 2016, please contact Gervaise Gaunt at DEDJTR Rutherglen on 02 6030 4571 or [email protected]