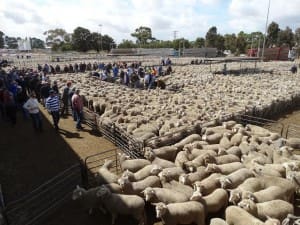 SHEEP meat producers with concerns about uncompetitive practices in markets have been urged to make submissions to an Australian Competition and Consumer Commission study.

The market study into the cattle and beef, and sheep meat, industries, is examining competition, efficiency, transparency and trading issues across the supply chain.

“I would encourage any sheep meat producers who have concerns about uncompetitive practices in the market to either make a submission to be considered as part of the market study, attend the regional forums planned for the study, or to contact the ACCC’s agriculture unit or the SCA directly,” Mr Harvey-Sutton said.

Mr Harvey-Sutton attended the first meeting of the ACCC’s Agricultural Advisory Committee today to discuss its task and role as a conduit between industry and the commission on competition issues.

“The ACCC Agricultural Advisory Committee is a positive development in ensuring producers are on a level playing field in the agricultural marketplace.

“I commend ACCC agricultural commissioner Mick Keogh and the agriculture unit for their work,” he said.

Mr Harvey-Sutton said a key point of clarification at today’s meeting was around the market study currently being undertaken by the ACCC Agriculture Unit into the cattle and beef industries and whether sheep meat producers can contribute to this process.

After the consultation forums in June and July this year, the draft findings will be published in late September 2016, with a consultation period in October. The final report is scheduled for late November 2016.

More information about the ACCC’s Agriculture Unit Market Study including the forums scheduled for June 2016 can be found at http://www.accc.gov.au/about-us/information-for/agriculture/cattle-and-beef-market-study

The ACCC has released an issues paper to assist interested parties in making submissions to the ACCC’s cattle and beef market, and sheep meat, study. The paper contains information about how to make submissions and key dates for the market study, details about what will be covered in the market study and issues on which the agriculture unit is seeking comment.

The consultation forums will inform the market study, examining competition, efficiency, transparency and trading issues across the supply chain. Their purpose is to hear directly from farmers and other people in the cattle and beef, and sheep meat, industries about competition and fair trading issues that concern them. Attendees will have the opportunity to raise their concerns directly with ACCC commissioners.

Anyone who has an issue to raise, but is unable to attend a forum, is encouraged to contact the Market Study team. Contact details and further information on the market study are available at www.accc.gov.au/cattlestudy.

Any interested parties are welcome to attend the forums.

You can register to attend by following the link below, or contacting the ACCC at [email protected] (link sends e-mail).

To provide a submission over the phone, please contact: