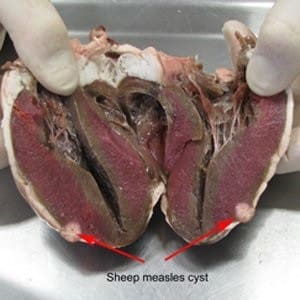 The Australian Meat Industry Council has sought WA government support in getting a sheep measles vaccine into commercial use in WA.

Meat processors recently met with Western Australian agriculture minister Ken Baston to continue dialogue over the issue of sheep measles, which causes significant economic losses due to the trimming or condemnation of sheep carcases.

The disease is a significant problem in the WA sheep industry where the losses affect producers and processors.

Western Australia’s three largest sheep and lamb processors have estimated that the combined annual losses to producers and processors from sheep measles is at least $1.3 million.

A vaccine was developed in 1989, but since most of the financial loss has been carried by the processors,  the producer sector has no inducement to buy or use the vaccine.

“To have a vaccination program that will eradicate the problem would be a responsible investment for the WA State government,” AMIC said.

The WA government has recently invested $10 million in a Sheep Industry Business Development Centre in WA. In the past decade sheep numbers across the state have dropped from 38 million head to around 15 million head.

There is a need to restore confidence in the sheep production sector and a sheep Ovis program is one way to contribute to that, AMIC believes.

Sheep measles (Cysticercus ovis) causes condemnation of carcases or parts of carcases at abattoirs, but rarely causes ill-effects in the sheep. Small white cysts appear in certain muscles, and while these cannot infect humans, they are considered unacceptable, leading to carcase condemnation.

The life cycle has two hosts: the main host—foxes, domestic dogs and occasionally dingoes and wild dogs; and the intermediate host—sheep or goats.

The tapeworm stage (Taenia ovis) occurs in the small intestine of the dog, with the tapeworm itself being up to two metres long. The adults produce eggs that pass out in tapeworm segments in the dog’s faeces. If these are on pasture, they can be eaten by sheep in which larvae develop and migrate to the heart and diaphragm and some other muscles.

In the muscles they form cysts up to 10 mm long. Over time, the cysts calcify, becoming hard. The cycle continues when dogs eat sheep carcases that contain viable cysts that develop into tapeworms in the dog’s small intestine.

No treatment for cysts in sheep is available; control is based on breaking the life cycle. Specifically, this means preventing dogs from eating sheep carcases, meat or organs. Freezing or cooking of meat and viscera may not reliably kill all cysts.

Dogs in sheep areas should continue to be regularly treated for tapeworm. Recent research by Dr David Jenkins at Charles Sturt Univiersity has shown that control of worms in farm dogs and widespread use of dry dog food has largely removed dogs as a definitive host. Foxes, however, have been shown to be active in maintaining the population of sheep measles.

Visit the Wormboss website for more information about sheep measles.