In SA’s rangelands several producers working together have been able to control lice over about 40,000 hectares. 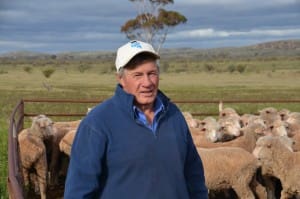 SA rangeland wool producer Geoff Power believes sheep producers sometimes don’t get on top of lice problems because they don’t work together on a regional basis.

“We should be able to get on top of it.

“If you’ve got a problem in your area, why not get together and work out a strategy?” he said.

“It’s not a blame game, it is about being honest.”

He said actively working with his neighbours to beef up biosecurity has come close to eradicating a costly lice problem in his area. Mr Power runs a self-replacing Merino flock east of Orooroo in South Australia’s rangelands 270km north of Adelaide, as well as a cropping property near Jamestown.

Several years ago he and his neighbours were suffering from a bad lice problem that Mr Power believed was costing him up to ten percent of his clip, as well as impacting on the wellbeing of his sheep. A severe lice infestations can drop wool cuts by up to 20 percent, he said.

“Working with our neighbours to get a proactive plan in place to tackle lice was a logical next step,”

“First you have to create the relationships,” he said.

“We held a meeting and we put our heads together to work out a strategy to solve our problem.

“We all agreed to shear at about the same time each year and we put a gentleman’s agreement in place about maintaining fencing.”

Mr Power said he no longer just return neighbour’s sheep straight over the fence, yarding them for pick-up so they can be treated and isolated.

“Since we have been doing this we haven’t eliminated the problem, but we are really on top of it.”

Mr Power also used a crutching trailer and portable yards to avoid moving mobs of sheep over long distances through the property to isolate mobs within his property and eliminate the risk of picking up stray sheep.

He treated his sheep every year for lice using backline treatments, but rotated products every three years to avoid chemical resistance occurring.

“I reckon there was some resistance; I reckon we over-used some products.

“I reckon just using the same chemical every year created a problem; there was some resistance.”

Mr Power believed building relationships and having biosecurity strategies in place between neighbours is a good first step in building awareness of the importance of biosecurity.

“I became interested in biosecurity because I have been in advocacy roles with the South Australian Farmers Federation and Livestock SA for the past 15 years and I have seen a lot of gaps in biosecurity right throughout our system.”

A study trip to Nepal to see the effects of Foot and Mouth Disease drove home the importance of having good biosecurity on farm.

“My advice to other people in this situation is to be proactive rather than reactive.

“These things will occur, so you’re better off to sit down with your neighbours and nut out a strategy to actually become proactive about a problem.”

Working together works at Reedy Creek 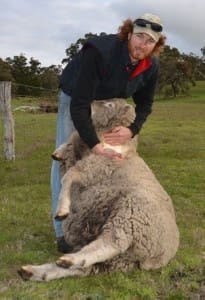 Reedy Creek prime lamb producer Josh Hancock and his neighbours in the area have shown that working together as a region can make real improvements in animal health and biosecurity.

“I really believe the best way to tackle a lot of animal health problems and biosecurity risk is to work together because these problems often don’t stay in the bounds of your own place.

“If you work with the community and the people around you, you get an understanding of the management practices going on over the fence so you can work together,” Mr Hancock said.

The third generation prime lamb producer runs 2500 ewes on his family property ‘Fairways’. He is also the secretary of the Mid South East Irrigators Association, from which evolved, with financial support from Australian Wool Innovation, the Reedy Creek Animal Health Group, with the aim of eradicating lice.

“As well as discussing lice and how we could manage it as a district, we heard from speakers and animal health reps on footrot, OJD and other issues,” Mr Hancock said.

“The opportunity to hear from experts on issues that affect production was a real drawcard to get more producers to attend meetings and we had up 30 producers on each occasion.”

“Something I learned through this process is that once you start talking to the community and asking for advice, you’ll find there are people willing to help.

“There are people who already know about a problem because a lot of people are already dealing with it and not saying anything,” Mr Hancock said.

“There can be some stigma that goes with animal health problems, so education and getting it out in the open is very important.

“We might not have fully eradicated lice yet, but having the relationships in place and the contacts in extension staff in government departments means that we are well positioned if another biosecurity issue ever came up in this region.”

Help available to set up regional biosecurity groups and plans

“A study by the University of New England and the Institute for Rural Futures found that up to 40pc of producers observe signs of lice in their flock each year.

“If that’s the case, that is a massive productivity impact for sheep producers,” she said.

“It’s important for neighbours to work together on lice control, as it is a highly mobile parasite that moves sheep to sheep, and therefore straying livestock increase the risk of spreading lice.

“Lice have a very long incubation period and it may be six months before you see any signs of an infestation after the introduction of new sheep so it’s important to monitor over a long period of time.”

She suggested neighbours have a written plan, identifying risks, common priorities and strategies.

“If you have an issue, chances are some of your neighbours have a similar issue, so it’s about sharing your experience and getting an understanding of the size of the issue in your area, to get a better outcome.

“As a group, there’s also more scope to get technical experts to come and speak on specific issues that are a concern for your group.”

“As a starting point, it’s important to understand what the priorities of the group are, and then determine what outcomes or goals you are trying to achieve, and LBN can help facilitate this process.”