A feral cat captured by a remote camera. Image – UNE.

DISEASES spread by feral cats can cost Australian agriculture up to almost $12 million each year, new research has found.

And sheep producers like Tasmanian mixed farmers like Simon and Kerryn Gatenby can be the hardest hit.

Research conducted under the Australian Government’s National Environmental Science Program (NESP) has shown that feral felines are passing on parasites such as Toxoplasma and Sarcocystis to livestock and poultry, with devastating consequences for sheep and goats.

Infected cats often don’t appear sick themselves and through normal roaming behaviour can spread millions of tiny parasitic eggs into the environment. These eggs then persist in soil, pasture and water for months and can be ingested by livestock.

The research has found that rates of diseases are particularly high among sheep, with Toxoplasma causing the loss of more than 62,000 unborn lambs each year and affecting South Australia and Tasmania more severely than other regions.

Affected sheep can abort their lambs 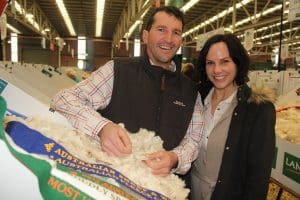 Polwarth breeders Simon and Kerryn Gatenby have had high lamb losses from sheep infected with toxoplasma.

Mr Gatenby said in the very wet year of 2016, testing showed that toxoplasmosis caused one mob of ewes to lose about 40 percent of their lambs.

“That year was particularly bad, because it was happening in old ewes.”

Affected ewes abort their lambs, from early in the pregnancy up to just before they were due to normally lamb, but the aborted lambs look not fully developed.

Feral cats are still a problem on their property which is about two kilometres from the nearest town.

“There is still a significant impact, just how you manage it is the key.

“So in a tight season – tight cold winters – sheep looking for feed can be pushed into areas they don’t normally go into and that’s how we ended up with a couple of bad runs.”

Mr Gatenby believes New Zealand has a vaccine, but it is not available in Australia. The Gatenbys control feral cats and don’t mate ewe lambs, running their hoggets in cat-infested areas through winter to gain exposure. He said the “theory” is that exposed dry ewes can develop an immunity to the parasite.

“But in 2016 we had a wave of Toxoplasmosis in our old six and seven year-old ewes – our hands-free mob.

“That means in extreme circumstances they could get it a second time, though the science doesn’t say that’s right,” he said.

“But experience says for me that I don’t think I run ewes for that long on this farm without having exposure to it.

“When it comes in a wave like that I reckon they are getting it a second time.”

Mr Gatenby supported calls for cat owners to desex their cats and keep them contained to limit feral cat numbers.

“As a dog owner, with my working dogs, I’ve got to be licensed, it’s probably the next step, I know it’s painful, but we all need to be accountable for our own actions, don’t we?”

Dr Schipp said while the environmental impact of cats has been well recognised, the research showed there is also a significant impact on livestock production.

“The two most significant diseases impacting livestock are parasitic infections transmitted by cats which together are estimated to cost Australian farmers $11.7 million in annual production losses.

“It is easy for livestock to contract these parasites as they simply need to graze in an area where cats have defecated,” Dr Schipp said.

“Our meat inspection processes are thorough and effective and our strict biosecurity laws help to ensure we can continue to enjoy our world-class produce into the future,” he said.

Threatened Species Commissioner, Dr Sally Box, said the research highlights the benefits of domestic cat containment and the importance of reducing the number of feral cats in and around farms.

“I encourage the community to reduce the spread of disease to livestock from domestic cat populations, as well as reduce the risk of cat predation on native wildlife, by being responsible pet owners.

“The best thing pet cat owners can do to lower the risks to livestock and wildlife is to keep their cats contained 24 hours per day and ensure that they are microchipped, registered and desexed,” Dr Box said.

The study conducted by the NESP Threatened Species Recovery Hub is part of a suite of research to improve our understanding and capacity to manage the impacts of feral cats on native wildlife.

The Australian Government has mobilised more than $32 million since 2014 to support projects delivering direct, on-ground action and research to reduce the impact of feral cats.

To find out more about NESP visit environment.gov.au/science/nesp