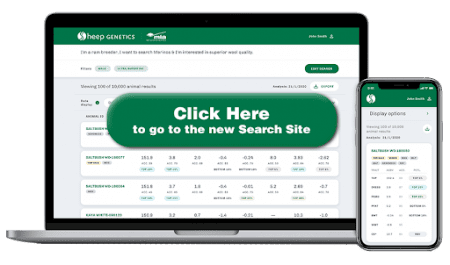 On 15 October, the sheep genetic evaluation service owned by Meat & Livestock Australia outlined a number of updates coming to the new-look Sheep Genetics search site, include a timeline of what can be expected and when.

Since the release of the new-look Sheep Genetics search site in August 2020, the SG team have been working on further enhancements to the platform.

Meat & Livestock Australia director and South Australian sheep breeder Andrew Michael said there had been concern by producers and breeders who had been great supporters of Sheep Genetics, but he was confident the proposed changes will be implemented within the stated timelines.

He said with COVID-19 and the changes to the Sheep Genetics site, the expected benefits from the SG data will be better utilised in the future. Mr Michael is hopeful MLA will put out some comparisons showing the benefits of linking SG and AuctionsPlus data.

fix to the ‘semen available’ filter

fix to the ‘load more’ function in searches and catalogues

fix to the search time-out for individual IDs

Other updates to be implemented by the end of October include:

Medium-term changes in next six months

The following features are expected to be implemented within the next six months:

ability to add multiple flock codes to a search

improved flagging of animals for sale or with semen available.

The following search site features are expected to be implemented over the next one to two years:

ability to export searches as a PDF

ability to view 16-digit ID in a search

ability to export searches to email and social media