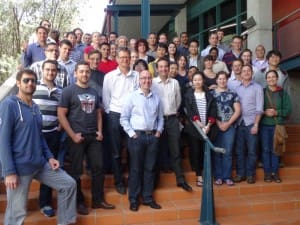 Collaborations that will generate faster, cheaper and more accurate DNA testing for sheep were fostered in NSW this week.

Some of the world’s leading animal geneticists, as well as the next generation of researchers, were at Armidale, NSW, to learn from lead scientists about the latest methods in genomics research.

The summer school provides an opportunity for post-graduate researchers to learn from global leaders in the field of genomics and for senior scientists to strengthen ties with their international peers.

“The idea is to bring together postgraduate students with the world’s best scientists who teach about the latest trends and developments in animal breeding technology,” Prof. van der Werf said.

“This year we have more than 50 registered participants, coming from around Australia, as well as New Zealand, the United Kingdom, Mexico, The Netherlands, Philippines, Brazil, Korea, Egypt and France.”

“Most participants work in the field of animals genetics, but also quite a few are involved in plants genetics and some work in human genetics. Genomics research is a fast developing area that transforms the way we think about genetics and breeding.”

The course is presented by two of the Sheep CRC’s lead genomics researchers, Hans Daetwyler and Ben Hayes, from Victoria’s Department of Primary Industries, and the topic is ‘From DNA Sequence Data to Genomic Prediction’.

The Cooperative Research Centre for Sheep Industry Innovation (Sheep CRC) is a collaboration of industry and government with the aim of increasing the productivity and profitability of the sheep industry through the utilisation of new technologies in both the meat and wool supply chains.

Sheep CRC chief executive James Rowe said the collaborations with other international researchers in this field is highly beneficial to the CRC’s work in developing faster, cheaper and more accurate DNA tests for the sheep industry.

Over the last seven years the Sheep CRC had also supported more than 30 post-graduate researchers, with those studying genomics invited to attend this week’s professional development course as part of the CRC’s Young Smart and Ready program, he said.

“This is an important program for ensuring our young scientists have the skills and international networks so that Australia’s sheep industry remains at the forefront of global industry, long after the Sheep CRC’s work comes to an end in 2019,” he said.