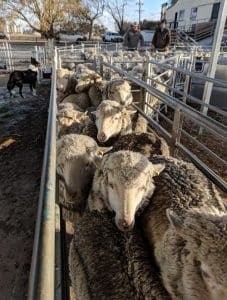 NEW England wool growers will be able to compare progeny from a range of genetically and subjectively assessed sires at a Merino Lifetime Productivity sire evaluation field day at Uralla on Friday.

Merino Lifetime Productivity Project manager Ann Ramsay said the sires represented a mixture of types not usually seen in the New England area, including top show and sale rams, and some with and without Australian Sheep Breeding Values.

The 16 sires with progeny on the ‘Chiswick’ site on the New England Highway include Australian supreme Merino ram at Bendigo in 2016, Conrayn MVB123; Moorundie Poll NE73, which was sold for $30,000 at Hamilton; the National Supreme Merino at Dubbo last year, Nerstane 150073 and West Plains Poll’s Mercenary 110004, a supreme exhibit at the Sydney Royal Show.

“So just seeing how those animals with maybe a bit more of a carcase composition are faring and what benefit that might offer in that environment might be interesting.

“It’s a good introduction to the project in a summer-dominant rainfall, but also I guess how they are faring under pretty tough conditions up there and what are the traits that are getting them over the line in that environment.”

The site was also unique because it had a project involving collection of mothering and birth records, she said.

“They are doing tagging at birth — all the other sites are relying on DNA to supply maternal pedigree.

“Chiswick are doing lambing rounds and are able to do birth weights and look at early environmental things.”

The field day will also include speakers talking about some CSIRO add-on projects, which includes research into wether resilience traits and bulk or pool genotyping.

Ms Ramsay said she saw the site’s sheep classed as a mob a couple of weeks ago and am really keen to see them drafted into their sire groups.

The field day will start at 10am and conclude at 3pm. Lunch is provided and growers should register at the CSIRO Liaison Centre. For more information contact Duncan Lance on 0447 297 135.