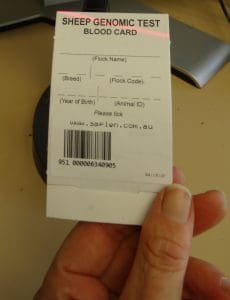 SHEEP DNA testing will be quicker and easier with ordering and payment changes being implemented by the Sheep CRC.

From July 1 producers will be able to pre-purchase DNA blood cards, allowing them to take blood samples at their convenience and only submit any for analysis at a later date to finalise selection options.

The changes could cut up to two weeks off the turn-around time under the old ordering system. An online payment system is also being implemented and will be available later in July.

Chief executive of the Cooperative Research Centre for Sheep Industry Innovation (Sheep CRC), James Rowe said producers can now pre-purchase blood cards at 90 cents per card and hold a stock on farm to use when it’s most convenient to take blood samples.

“The parentage or genomic test order can then be made separately to purchasing the blood cards.

“Previously breeders would order and pay for a number of tests, wait until that exact number of blood cards were sent to them, and then conduct an extra yarding of only those animals they were interested in testing to collect the blood samples – it’s fair to say it was a cumbersome process,” Professor Rowe said.

“Now, they can sample as many animals as they wish, hold those samples on farm, wait until they see how those lambs mature, and only need to pay for DNA tests for those animals they are most interested in when they send in the blood cards. It will save sheep breeders both time and money.”

The card and test pricing structure has also been altered to reflect these changes, with the price of the blood card or TSU now separate to the price of the DNA tests. Parentage/poll tests are now $16.10 (ex GST) and the genomic test now $49.10 (ex GST).

Professor Rowe said the change was in direct response to a recent survey which indicated that breeders would be more willing to use DNA testing to improve their flocks if turnaround times were faster.

“Being able to order and keep on hand a stock of blood cards may seem a simple change to the process, but in effect it will shorten the turnaround time by up to two weeks and save breeders time, labour and money.”

Working with its participants and a number of international consortia the Sheep CRC has developed a range of sheep DNA tests, including genomic trait analysis, parentage and poll/horn tests, which rely on producers to collect a small tissue sample – either a couple of drops of blood sample onto a special card or an ear punch sample. The samples are sent to Geneseek’s laboratories for extraction and analysis of DNA before the results are processed and reported by the Sheep CRC and Sheep Genetics.

The Sheep CRC operates as part of the Federal Department of Industry, Innovation and Science’s CRC program. It is a collaboration of over 40 organisations from across industry, government and the commercial sector, and includes producer groups, farm advisers, universities and research organisations, meat processors and retailers.

Place an online order for cards and/or tests at www.sheepcrc.org.au

More information on sheep DNA testing is available at www.sheepcrc.org.au