Sheep CRC lauded as ‘model for the future’

AUSTRALIA’S Sheep Co-operative Research Centre was lauded as portraying the future model for all CRCs by the Parliamentary secretary to the Minister for Industry, Bob Baldwin, in Adelaide today.

At the Sheep CRC’s 2014 Concept to Impact conference, Mr Baldwin announced a $15.5 million extension in Australian Government funding for work to 2019, with producer organisations matching this with $45 million in cash and in-kind contributions. 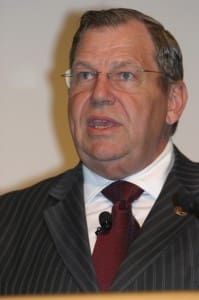 “The Government believes this type of co-investment is the future model of CRCs.

“One where you move away from a Government-funded business model to a more commercialised arrangement with private enterprise,” he said.

“And why…..because it is about outcomes, and outcomes bring about real and genuine support from industry.”

“We do believe a CRC should have a target for when it will reach commercialisation and when it should be privately funded.”

Mr Baldwin said government was still planning to undertake a strategic review of CRCs this year to examine the purpose, assess the strengths and identify the weaknesses of each CRC.

“And if required, relaunch CRCs, if their direction needs to be altered to meet the Australian industry’s growing needs.”

Mr Baldwin told the sheep producers at the conference the government needed people to believe in CRCs.

“But we also want you to become self-sustaining in the future.” 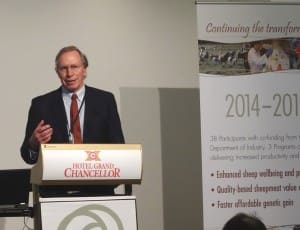 He said 38 organisations were supporting the Sheep CRC in its plans for the next five years, that would focus on extending “that transformational momentum” the centre had built-up.

“At the centre of that has been this Information Nucleus (flock) program….that has generated most of the really exciting science that you have heard about today.”

He said the Information Nucleus flock program had helped researchers and producers understand complicated meat science, genetic and environmental factors, genomics and it has given the industry a “bio-bank” of measurements from the flock.

“They are in the computer, the DNA is in the freezer, and that is what we are going to build this next five year program on.”

During the next five years the Sheep CRC will focus on three key areas: to enhance management of sheep wellbeing and productivity, to introduce value-based trading of sheepmeat, and to deliver affordable DNA-based genetic tools.

Professor Rowe said the CRC Program, with its industry-driven focus and medium-to-long term funding was achieving great things for the sheep industry.

“The 38 organisations participating in the Sheep CRC highly value the CRC framework as it provides them with direct input into the research, avoids duplication, and produces the outcomes their businesses require,” he said.