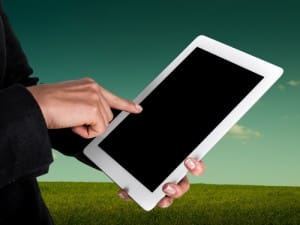 Nathan automatically went into the draw for the iPad when he took a free subscription to receive Sheep Central’s regular email news alerts.

Thousands of wool producers, lamb producers and other stakeholders across both industries now receive Sheep Central’s free regular news alerts and regularly visit the website, coordinated by editor Terry Sim out of Sheep Central’s headquarters near Hamilton in Victoria.

Nathan with his wife Kirstie manage for the Henderson family, the Avington Merino and Poll Merino studs and a commercial Merino enterprise on the property of the same name near Sidonia, not far from Kyneton in Central Victoria. He joined the Sheep Central free subscription list about ten days ago.

To increase the quality of the ewe base an extensive ET & AI program has been carried out over the last decade.

Ewes are tested and classed annually and indexed. Stud sires need to excel under strict selection indexes and have been benchmarked in the show ring among the best in the country. The results of our breeding programme to date show that we have been successful in combining visual appraisal with performance recording.

At shearing in November, a laserscan machine is used to test all fleeces and a specialist classer is used to class the fleeces and make up bales in half micron lots. The top price for Avington wool was 6500c/kg, achieved in 2014.

The average micron at the last shearing was 15.8 and average fleece weight 5.2 kg for adult sheep. The total number of sheep run across the enterprise is currently around 12,250. Additional land was purchased in 2009, 2010 and 2014, and stock numbers are expected to increase to 20,000 in the next three years.

Mr Anderson has been focussing in recent years on developing the poll stud, using genetics purchased from Alfoxton. In 2010 the stud purchased an ultrafine Poll ram and 32 ultrafine stud ewes from Merryville. All sheep in the poll stud are now being DNA tested to confirm their poll status.