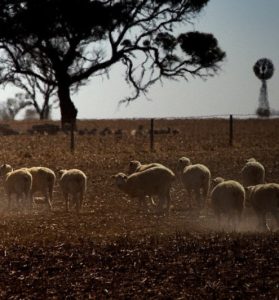 AVERAGE farm business profits in Australia’s sheep industry are expected to be positive in 2018-19, compared with forecast negative results for the beef, grains, and dairy industries.

The ABARES report ‘Drought impacts on broadacre and dairy farms in south-eastern Australia’ released today said drought conditions are expected to drop the average farm cash income of broadacre farms by nearly $70,000 per farm in 2018-19 compared to last year.

Although sheep specialists have not been spared the impacts of drought, favourable prices for wool and sheep meat are expected to limit the worst of the effects, the report said.

However, the percentage of sheep properties expected to record negative farm cash income is estimated to rise from nine percent of the 41 operations surveyed in 2017-18 to 22pc in 2018-19, although this is still lower than in the other broadacre sectors for this financial year – grains 29pc, beef 31pc and dairy 34pc.

ABARES executive director, Dr Steve Hatfield-Dodds, said the new ABARES report provided a perspective on the impact of the drought.

“Although sheep specialists have not been spared the impacts of drought, favourable prices for wool and sheep meat are expected to limit the worst of the effects.

“It is important to note that the final picture for farm incomes in South-Eastern Australia in 2018–19 will depend on the success of summer crops in northern New South Wales and southern Queensland,” he said.

“Good outcomes for summer cropping are likely to improve cropping farm incomes in these regions.

“This report confirms that average farm financial performance in South-Eastern Australia will be significantly worse in 2018–19, but not to the levels experienced during the 2002–03 and 2006–07 droughts.

“The impacts of the drought on farm financial performance will be variable, largely in line with regional differences in the severity of rainfall deficiencies,” Dr Hatfield-Dodds said.

“Average farm cash incomes in 2018-19 are forecast to be 58pc lower in New South Wales and 31pc lower in South Australia, albeit from comparatively high levels in the preceding year.

“Within New South Wales, the largest declines are expected in the northern and western parts of the state, where the impact of rainfall deficiencies on farm financial performance have been particularly apparent in 2018-19,” he said.

“Average farm cash incomes are expected to fall across all industries in South-Eastern Australia, with the sharpest falls recorded among grain producers and dairy farms.

“Lower milk production, higher fodder costs, and reduced herd sizes mean that average farm business profit for this industry is forecast to be over $150,000 lower per farm in 2018–19 compared with the previous year,” Dr Hatfield-Dodds said.

“Detailed projections of farm financial performance for 2018–19 across all state and territories will be available at the Outlook 2019 conference in March.”

Click here for details on the ABARES Outlook 2019 on March 5-6 at the National Convention Centre, 31 Constitution Avenue, Canberra.