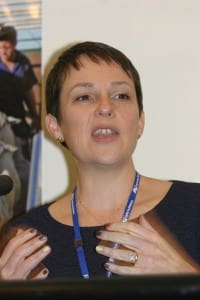 They have reiterated their support for the current mob-based visual ear tag identification of sheep and goats in Victoria.

The latest media release from the producer bodies and livestock agent organisations follows a joint letter to Victorian Minister for Agriculture Jaala Pulford late last week, opposing any moves toward mandating the use of electronic or radio frequency identification (eRFID) tags in Victoria.

ALPA chief executive officer Andy Madigan said a letter from Ms Pulford in November last year gave the impression that she still wanted Victoria to “lead the charge” and mandate eRID tags for sheep and goats in Victoria.

“Our impression is that she is heading that way.”

The Pulford letter was in response to the industry’s united position on the issue last year, and also listed the issues she saw with the mob-based system. But it did not outline any timeline or program for industry consultation or electronic tag introduction and funding.

“While we support the right of individual producers to use eRFID, the enormous costs and resources involved with implementing mandatory eRFID across the supply chain would far outweigh any benefits for the industry.”

“The responsibility for the NLIS is shared between industry and government” Mr Murray said.

“As yet, the industry hasn’t received a detailed proposal or information about a consultation process into any possible changes to the National Livestock Identification Scheme proposed by the Victorian minister.”

WoolProducers Australia president Richard Halliday said WPA believed to impose the expense and complication of mandatory electronic tags onto producers and industry without a concerted effort by all stakeholders to enhance the current system, is not justified.

“The current system is simple, cost-effective, and well-accepted by the industry.

“A consistent application of the already agreed national traceability standards by all states is crucial for the success of a national mob-based traceability system,” Mr Halliday said.

The current system, with some increased compliance by both government and producers, is capable of achieving the desired traceability standards nationally.”

ALPA has more than 1200 member agency businesses across Australia, including Elders, Landmark and Ruralco.

Sheep Central is seeking comment from Ms Pulford on the industry’s latest united stance on sheep and goat identification.