Sheep and quality lambs dearer in early sales this week 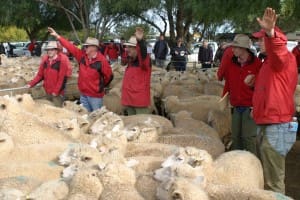 Good sheep were dearer and trade lamb prices were up for quality and those of the right weight on Monday, but generally faltered on Tuesday across the country as more new season lines came into markets.

Naracoorte sheep and Bendigo lambs up for small numbers

The stand-out results were at Bendigo where prices for some quality new season and old trade lambs suiting supermarket and domestic orders lifted $10-$15 in a generally firm market, in reaction to lower quality offerings in southern New South Wales saleyards, according to agents.

Prices changed little for good quality medium and trade weight lambs at Tamworth on Monday, with only 2895 lambs, down 380, and 2050 sheep, down 230. NLRS said the quality of the lambs was fair to good, but no extra heavy weights and limited numbers of young lambs were yarded. Secondary lambs struggled, lightweight trade lambs were dearer, but heavy lambs were slightly cheaper trend. Heavy ewes were dearer.

Bendigo sheep and some lambs dearer

In Victoria at Bendigo on Monday, agents yarded 8559 lambs, down 95 and 4810 sheep, down 534, for an erratic buying field. Some good quality lambs gained $5 to $10/head, compared to last week’s cheaper rates, with a two extra heavy lambs making $155, but only limited sales above $140/head.

The 2,700 new season lambs from mainly the Boort, Kerang, Echuca and Goulburn Valley areas sold to a top of $144 for a pen estimated to at 26kg with an $8 skin. Most young lambs were trade and light trade weights, with the best making $118-$132. The heaviest lambs came out at 520c/kg, while those suiting supermarket and domestic slaughter sold to stronger bidding to 550c/kg-570c/kg cwt. Restockers paid to $63/head for young Merino lambs.

NLRS said the quality of the old lambs was very mixed and buyers selected against poor carcase shape or long dry skins. Most old season lambs over 20kg carcase weight sold from $95-$134, from about 440c/kg-520c/kg on the better quality lots. Well-conditioned trade weight Merino lambs were dearer, at $95-$107 or around 430c/kg-440c/kg cwt. Light weight slaughter lambs generally made from $64 to $82/head.

The sheep sale was generally firm to dearer with Merino ewes in full wool making to $100 and heavy crossbred ewes to $96/head. Most light and trade weight sheep sold from $50- $75 and the best mutton was estimated at 310c/kg-330c/kg cwt.

Ballarat sheep up to $10 dearer

NLRS said most sheep sold to a dearer trend, to be up to $10 head dearer on last week. Restockers paid $145 for young joined crossbred ewes and $55-$90 for shorn Merino wethers.

In South Australia at Naracoorte on Tuesday, mutton demand prices jumped $10 to $20 for a very small yarding of 904, up 87, as Thomas Foods International bid strongly to secure local supplies. Prices were firm for the yarding of 1382 lambs, 725 more. The three pens of light trade weight new season lambs made from $70-$91.