Shearers Clancy Shirrefs and Darcy Sambell from Edenhope shear a sheep with the hand winder watched by Luke Rowbottom.

SHEARERS competed in a rare event combining blade, machine and hand-powered shearing skills at the Orford Vintage Rally in south-west Victoria at the weekend. 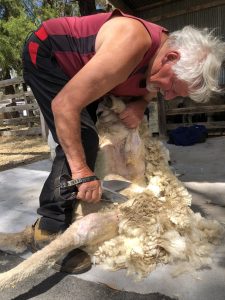 The event has become an annual feature of the rally which attracts hundreds of people with vintage engines, cars and tractors from throughout Victoria and interstate to the Orford sports ground west of the state capital Melbourne.

Celebrity judge and retired shearers Ian Zscheck said he judged the event on the shearers’ attitude, manner, charisma and the cleanliness of their job.

The winners were Clancy Shirrefs and Darcy Sambell from Edenhope and Mr Zschech said they did a good job with their blade and machine shearing.

Organiser Luke Rowbottom said the event usually involved a team from out of town competing against an Orford team. He said the teams have to shear sheep with the blades, a modern machine-driven handpiece and a hand-powered winder as was used in sheds before electricity was available.

“We had the hand winder – the husband and wife machine – a new Lister Elite shearing plant and we did two with the blades as well.”