March to May 2021 rainfall outlook: 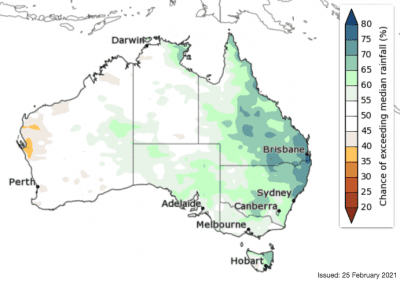 THE Bureau of Meteorology’s outlook for autumn, released today, shows above average rainfall likely for parts of eastern Queensland and New South Wales, and eastern Tasmania, with a more neutral outlook elsewhere.

The Autumn Climate Outlook shows that warmer days are likely for the period from March to May in northern parts of Australia, Tasmania, and the west coast of Western Australia, however parts of New South Wales may have cooler than average autumn days.

Autumn nights are likely to be warmer than average across large parts of the country.

Bureau climatologist Dr Naomi Benger said that while current observations and forecasts show La Niña has passed its peak, its effects on the Australian climate are likely to persist.

“The tropical Pacific Ocean is forecast to return to neutral conditions (neither El Niño nor La Niña) during autumn, consistent with the typical lifecycle of La Niña events.

“However, it is not uncommon for the effects of La Niña to still be felt as the event declines. That means an increased chance of above average rainfall, particularly for eastern regions,” Dr Benger said.

The 2020-21 summer is already the wettest since 2016-17, with below average rainfall only in greater south-eastern Queensland from the New South Wales border to the Capricornia region.

December 2020 was the third wettest December since national records began in 1900, while Australian summer temperatures are on track to be the lowest since 2011-2012, with temperatures above average only for parts of Queensland and the west coast of Western Australia.

This severe weather season (November to April) has so far seen four tropical cyclones in the Australian region, with one (ex-Tropical Cyclone Imogen) making landfall in the Queensland Gulf Country.

There have also been several significant tropical lows that brought heavy rain and some flooding at times to parts of northern Australia.

Note: to determine above and below average the observed and forecast data is compared to data for the 1961-1990 period. This period is recognised by the World Meteorological Organization as suitable for assessing long-term climate variability and change. 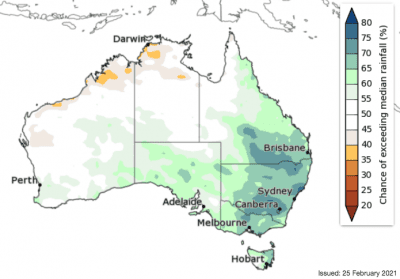 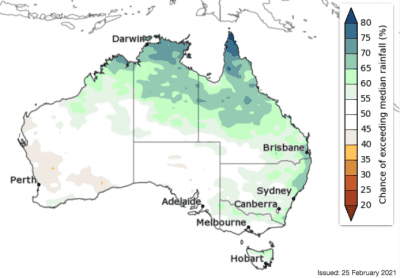 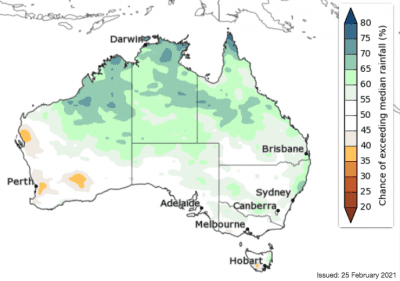 Warmer autumn days likely for much of the north, west and far southeast Australia; warmer nights across north, east and southwest Australia

Minimum temperatures for the fortnight 1 to 14 March are likely to be warmer than average across most of the NT, northern and eastern Queensland, southern Victoria, Tasmania, and eastern and southern WA. Chances are greater than 80pc in the eastern Top End and Cape York Peninsula. The western Pilbara is likely to have cooler nights.

Mean maximum temperatures for autumn (March to May) are likely to be higher than average for much of the northern tropics, western WA extending down the south-west WA coastline, southern Victoria, and Tasmania (greater than 60pc chance). Cooler than average maximum temperatures are likely (greater than 60pc chance) for parts of NSW.

Autumn minimum temperatures are likely to be higher than average across most of Australia except for parts of southern WA and western and central SA. Chances of warmer nights are greater than 80pc for the northern tropics, eastern Queensland, southern Victoria, and Tasmania.

Maximum temperature outlook Mar to May 2021: 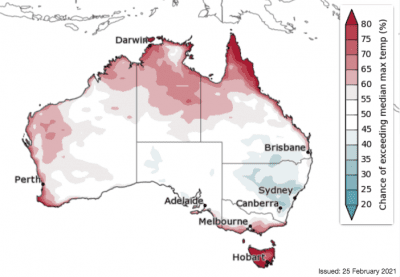 Minimum temperature outlook Mar to May 2021: 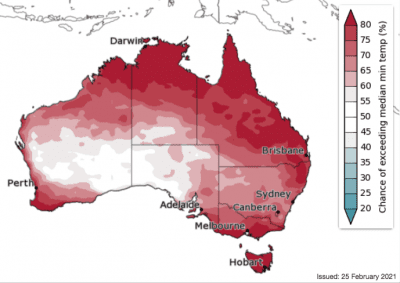 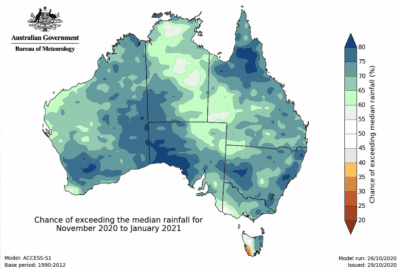