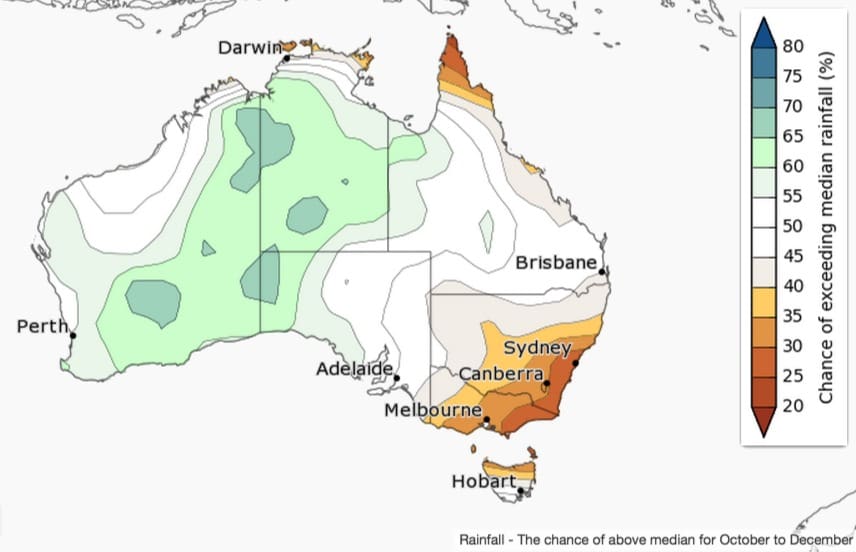 The Bureau of Meteorology has today released a special update to the three month climate outlook for October to December 2015 issued last week, after recognising a significant shift towards stronger El Nino conditions.

September rainfall was third driest on record for Australia. Very low rainfall has been received over the past 12 months in the southwest of Western Australia, southeast South Australia and most of Victoria.

Due to changed conditions in the tropical Indian Ocean and the strong 2015 El Niño, the rainfall outlook for October has shown a significant shift towards a drier month nation-wide, with the southeast quarter of Australia indicating a less than 20 percent chance of exceeding median rainfall for the month. This means the region has a greater than 80pc chance of a drier month.

The October rainfall outlook is accompanied with high chances of warmer days and nights south of the tropics.

The current outlook reflects a combination of a mature El Niño in the Pacific, and an emerging positive Indian Ocean Dipole.

The specific outlook for October shows a notable shift – up to 40 percentage point decrease in some areas – towards a drier month nation-wide, with the southeast quarter of Australia indicating a less than 20pc chance of exceeding median rainfall. This means the region has a greater than 80pc chance of a drier month.

October to December is likely to be drier than average across southeast and northeast Australia. Conversely, eastern parts of WA, and southern parts of the NT show a slightly increased chance of a wetter three months.

Historical outlook accuracy for October to December is moderate over most of Australia.

Overnight temperatures are likely to be warmer than normal across much of the country except in parts of the tropical north which has an increased chance of cooler nights. Across large parts of southern Australia, there is a strong likelihood of above average night-time temperatures (greater than 80pc chance).