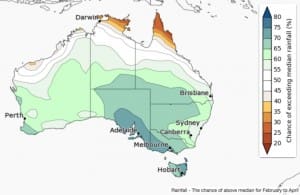 Above average rainfall is favoured in February to April for central and southern Australia, while the far north is expected to be drier than average, according to the Bureau of Meteorology’s latest three monthly seasonal climate outlook statement released today.

The February outlook indicates rainfall is more likely to be above average in parts of eastern Australia, but below average in WA’s Pilbara and northwest coastline.

For February to April, rainfall is more likely to be above average across much of the southern half of Australia with the strongest probabilities in the southeast. The tropical north however is favoured to have a drier than average period.

Historical outlook accuracy for February to April rainfall is somewhat patchy with moderate skill over most of the country, but low skill in inland parts of the NT extending along the WA border, as well as in small patches in Queensland, western NSW, and along the border of NSW and Victoria.

February is favoured to be cooler than average across much of NSW and southern Queensland for both daytime and overnight temperatures, while in the far north, west and south of the country, temperatures are more likely to be above average.