December to February wetter than average for nearly all of Australia

DECEMBER to February is likely to be wetter than average for nearly all of Australia — with a greater than 70 percent chance of rainfall in most areas and greater than 80pc chance along the Queensland coast.

Tasmania is the exception, with equal chances of wetter or drier conditions being more likely.

A similar outlook exists for December though the likelihood of above average rainfall is not as high (greater than 65pc chance in most areas).

While the outlooks indicate wetter than average conditions, southern parts of Australia are entering into their drier season, so rainfall is not likely to be sufficient to relieve long-term rainfall deficits. 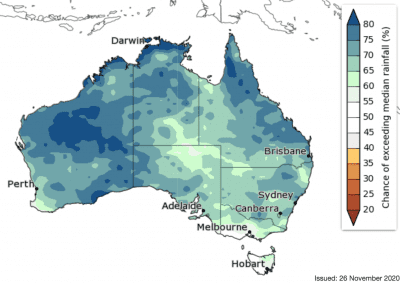 Rainfall outlook for the month of December 2020. Click to enlarge 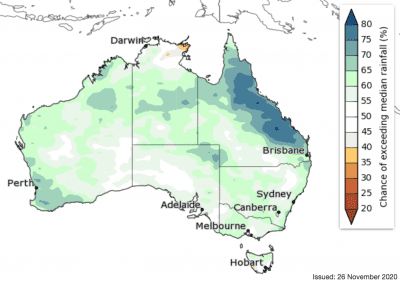 Rainfall outlook for the month of January 2021 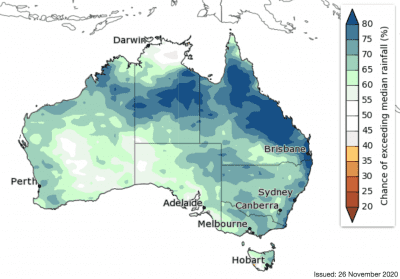 Averaged over the fortnight 30 November to 13 December, maximum for most of the eastern half of mainland Australia as well as western WA (greater than 75% chance). Cooler daytime temperatures are more likely over the Kimberly and along the Eucla coast. On average, minimum temperatures during this period are very likely to be warmer than the long-term mean across almost all of Australia (greater than 80% in most areas), except over southern Australia where roughly equal chances of warmer or cooler minimum temperatures are more likely.

The average maximum temperature for December to February is likely to be higher than the long-term average for Victoria and adjacent parts of SA, Tasmania, the far west of WA, the northern coastlines of the NT and Queensland, and around the NSW/Queensland border. It is likely to be cooler than the long-term average for south coast WA and northeast WA.

The average minimum temperature is very likely (greater than 80% chance) to be higher than the long-term average across Australia during December to February, apart from around southeast WA where there is a closer to 60% chance. 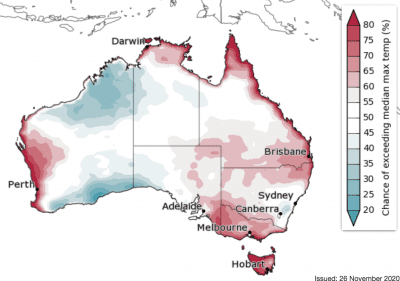 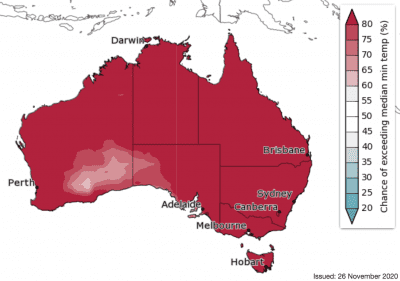 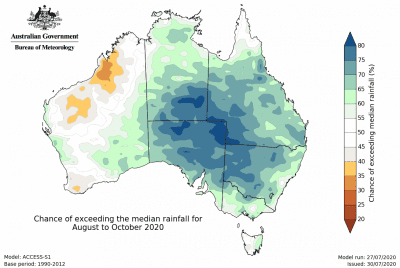