Rainfall in August to October is likely to be above average across eastern and northern Australia, according to the Bureau of Meteorology’s latest three month outlook.

The western half of Australia has roughly equal chances of a wetter or drier three months. 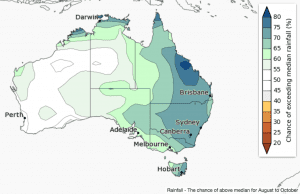 August is likely to be wetter for eastern and northern Australia.

Historical outlook accuracy for August to October is moderate over most of Australia, but low in parts of central Queensland and interior WA.

Warmer days likely for the northwest and Tasmania; cooler in the east