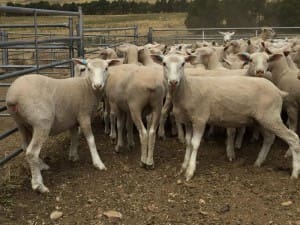 PRICES generally improved slightly for the tight supplies of quality trade and heavy lamb available in saleyards this week.

The tight quality supply situation is being exacerbated by stock water shortages in NSW forcing unfinished lambs into the saleyards and direct to works, depressing saleyard demand from processors.

Prices were firm to softer for quality trade lambs in NSW saleyards, lifting only for good heavy lambs over 26kg cwt. In Victoria and South Australia, prices lifted for well-finished trade and heavy lambs — mainly for supplementary-fed lines at Bendigo and Dublin, and for the fresher lambs at Ballarat.

Most 18kg+ cwt new season lambs are making 470-550c/kg in all states, but best quality 22-26kg cwt lambs sold to 580c/kg at Bendigo and Ballarat. Indicative of the dry season and supply pressure on processor’s grids was the general fall in over-the-hook rates this week. Restocker demand is solid in most saleyards.

The National Livestock reporting Service said market feedback suggested most processors have adequate supplies of sheep awaiting slaughter ahead of next week’s disrupted kill due to the Australia Day public holiday.

In NSW, the NLRS said over-the-hook sheep and lamb indicators this week eased. Well-finished trade weight lambs are hard to find, with most being unfinished. Water supply is an issue in the south west, resulting in more turnoff into the saleyards and direct-to-works.

In South Australia, the NLRS said over-the-hook lamb indicators declined across all categories this week, with trade, heavy and extra heavy weights down an average of 23c/kg cwt week-on-week. Mutton indicators were firm, with no changes reported.

Queensland over-the-hook rates were not available at the time this report was prepared.

Most weights and grades were represented in the sheep yarding. Light and medium weight ewes were $15-$18 cheaper and heavier sheep finished $5 cheaper. The 2 score ewes sold from $20-$53, while the better 3 and 4 score crossbreds sold from $45-$94 and heavy weight Merinos with longer skins made to $125.

The NLRS said there was a limited supply of well-finished trade and heavyweight lambs as vendors show resistance to the falling market, but a large offering of lightweight young lambs suitable for the restockers. The usual buyers were present. Market trends were again cheaper for the trade and heavyweight lambs in both young lamb and lamb categories.

Trade weight lambs were down by $3-$6, with some quality related price change also. Heavyweight lambs were less-affected, with some sales indicating little change. Despite the cheaper market for the finished product, restocker orders were very strong on lightweight young lambs and prices were up to $8 dearer.

Trends varied in the sheep market, with medium weights mostly cheaper, down $1-$5. Heavy sheep prices change little. However, there was some weight-related price change.

The NLRS said lamb quality was mixed, with more plainer store types. Some good lines of heavy and extra heavy weight lambs were offered. Most of the usual buyers competed in a fairly steady market.

Most of the sheep were Merinos. More plainer light sheep were offered. Quality sheep held fairly firm, but the plainer types showed a cheaper trend. Merino ewes sold from $72-$104. Crossbred ewes ranged from $64-$90. Merino wethers made $76-$118.

The NLRS said lamb quality remained very mixed, with only supplementary-fed lambs displaying good finish and carcase weight. Most of the lambs off grass were in plainer condition, lacking fat and cover due to the dry conditions. The market fluctuated, opening softly before gaining momentum to post some much dearer prices for quality trade weight lambs toward the end of selling.

Prices for well-finished lambs, 22-26kg cwt, and suiting the top domestic kill orders, averaged $5-$10 dearer. Other lambs recorded mixed results depending on quality. The market reached a top of $157 for shorn export lambs. There wasn’t a lot of weight in the yarding this week and the limited selection of export lambs sold from about $150-$157 and averaged an estimated 515c/kg cwt. Buyers were working on slightly stronger skin returns of up to $10.

Domestic demand was the main driver of the market this week, with the lead pens of lambs in a carcase range of 22-26kg cwt selling from $128-$150. Some of these lambs were estimated at up to 580c late in the sale, while the overall average across all lots was about 540c/kg cwt. Bidding for secondary lambs was more erratic at $105-$120 for light and medium weight trade lambs, while small lambs ranged from $48-$96 and were cheaper in places.

Store lamb prices also fluctuated, with some sales dearer and others cheaper for an overall softer result compared to last week. Most of the better-sized store lambs sold from $70-$90, with select pens out to $107.60.

Processor demand for mutton was much weaker, despite a smaller offering. Most weights and grades recorded price falls of $12-$16, with very plain and lightweight ewes recording some of the biggest corrections compared to a week ago. Feedback suggests most processors have adequate supplies of sheep awaiting slaughter ahead of next week’s disrupted kill due to the Australia Day public holiday. The best price of $108.60 was paid by restockers for a line of heavy Merino wethers in a high-value skin. Heavy crossbred ewes sold to slaughter made $66-$98. The bulk of the light ewes sold from $20-$55. Carcase rates of 230-265c/kg covered most mutton sales.

The NLRS said lamb quality was average to good. The regular buyers operated keenly in a dearer lamb market, with trade weight and heavy lambs generally selling up to $5 higher. The best heavy lambs sold to $175, with well-covered lambs suiting domestic orders making $125- $152. A good line up of heavy and extra heavy lambs was presented in excellent condition and with plenty of weight.

At the South Australian Livestock Exchange at Dublin on Tuesday, the agents yarded 7293 lambs, 293 more than last week, and 3392 sheep, 392 more.

The NLRS said the yarding of crossbred and Merino lambs sold stronger competition from the usual trade and processor buyers. Many lambs were showing signs of the dwindling feed reserves and buyers were keen to secure supplementary-fed lambs.

Light weight Merino lambs were plentiful. Restockers and feeders paid $30-$76, while light weights sold to processors lifted $2 to make up to $85. Trade weight Merinos sold from $102-$112 to average 458c/kg and heavy weights made to $120.

The NLRS said lamb quality was very mixed with only a few pens of good quality lambs with weight and condition. A much smaller field of trade and processor buyers was present and not all were fully active. Restockers were active, as all prices dipped, with sheep suffering a significant fall.

Muchea’s lamb prices ease by up to $9

Mutton prices remained close to last week’s rates and wethers lifted slightly, despite limited live export orders.  There were some good drafts of heavy weight ewes and prices were similar, with the light weight drafts making $10-$40. The 2 score processor mutton made $35-$65, also firm on last week, at close-220c/kg cwt. Better-conditioned and heavy weight ewes sold from $47-$78, with skin values of up to $12 on some ewes. Restockers were not as active this week and young ewe prices eased by close to $6 to $30-$55. Mature ewes mostly made $15-$52.

Wether prices lifted by close to $6, all going to feeders and restockers. Live exporter orders were limited. Heavier export wethers made $70-$95, with the lighter and store drafts selling from $60-$75. Dearer wethers had skin values of up to $15. Rams sold to live export buyers made $30-$70 and old rams suitable for processing sold for $10-$30. Ram lambs sold to $80. Discounts for stock presented with old declarations continued, and in some cases, reduced values by more than $10.