Scottish shearer Mutch too good for Kiwis on Saturday 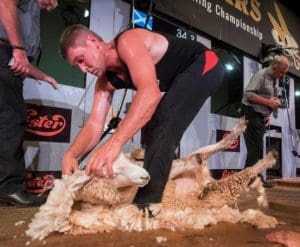 The 38-year-old Mutch led for all but a few seconds of the four-man final over 20 sheep each, before reigning world champion John Kirkpatrick nudged in front down the last side and was first off in 16 minutes 48 seconds.

But, with both shearers putting more than two sheep around fellow finalists Murray Henderson and Mark Grainger, Mutch kept the quality together to card better than Kirkpatrick in board and pen points to win by 1.2 points. Grainger had clearly the best pen points to claim third place overall.

It was the Scotland international and Taranaki farmer Mutch’s 17th open final win in New Zealand since he stepped up to the top class and his third this season, in which he has been runner-up nine times, eight of them to Rowland Smith. Smith didn’t defend the Waimarino title he had won six times in a row since 2012.

But Mutch has won the only two times that Smith has been beaten in New Zealand since the end of 2016, in the 2017 Rotorua A and P Show final in which Smith was fourth in Janury last year, and at Tauranga this year, when Smith failed to qualify for the final.

Mutch’s open wins in New Zealand, in almost 150 finals and including the 2012 world title and 2015 Golden Shears Open, both in Masterton, have come at 12 venues, dating back to his first in the national lambshearing championships at Raglan in 2007.

Others have been at Ohura, Wairoa, Stratford, Taihape, Marton, Rotorua, Aria, Tauranga, and now Raetihi, but on April 5-7 Mutch will be hoping to add to the list the New Zealand Championships at Te Kuiti, where he was runner-up in the 2000 Junior final, but has made just two Open championship finals, for third in 2016 and sixth last year.

It was a big day for 17-year-old Daniel Biggs who had his first junior win, following a sequence of promising performances which included sixth place in the Golden Shears Junior final.

The anniversary was marked with a presentation to Peter Lewer who has been involved with the Waimarino Shears about 35 of the 40 years, including commentating and judging.

RESULTS from the 40th anniversary Waimarino Shears at Raetihi on Saturday, March 17, 2018: