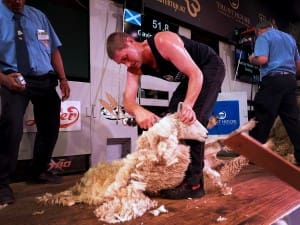 A Scottish shearer who settled in New Zealand to farm in Taranaki has become the first shearer from overseas to win the Golden Shears Open Shearing Championship.

Gavin Mutch, the 36-year-old won the title on the same stage in Masterton that he won the World Championships final in 2012, bringing fame both to Huntly in Aberdeenshire and New Zealand’s Forgotten Highway hamlet of Whangamomona, Shearing Sports New Zealand media officer Doug Laing said.

Mutch’s wife Pip and their children watched the internet livestreaming from home in Taranaki, and others were watching the history-making 55th Golden Shears Open finalist over breakfast about 20,000km away.

Mr Laing said the win ushered in a new era of open shearers after legendary Te Kuiti shearer David Fagan was eliminated in the semi-finals, in what was to have been a bid for a 17th and final Golden Shears Open title before retiring next month.

Mutch said Fagan had stopped a lot of other great shearers from achieving the ultimate goal in World shearing, and he was glad to have won before the 53-year-old Fagan retired.

The 2010 winner, Cam Ferguson, of Waipawa, was also ousted in the semi-finals, leaving a unique field comprising just one former winner, Hastings shearer Dion King, and including three newcomers.

It was the first time since 2002 that there had not been at least two former winners, and the number of first-time Golden Shears Open finalist in the six-man field was the most since 1983, Mr Laing said. 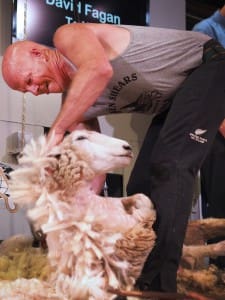 After the elimination of Fagan and Ferguson, the winners of 18 finals between them this season, the pace in the final was expected to be a battle between Mutch and King, and possibly the unheralded 30-year-old Pyper, who ultimately was top emerge as a serious hope of being the first South Island shearer to win the title since 1989, Mr Laing said.

The lead see-sawed mainly between King and Pyper, on stands one and two, but King ultimately finished first in 17 minutes 36.835sec, almost losing his last sheep over the front side of the board instead of through the porthole.

He beat Pyper by 10 seconds, Mutch by 20, and fast-finishing surprise packet Aaron Haynes, of Feilding, who finished in 18 minutes 4.407sec.

Few in a crowd of well over 1600 were prepared to pick the ultimate outcome while judges calculated pen quality points, and ultimately Mutch, scoring well in quality points but still not the best, had done enough to win by just 0.596pts from Haynes, Golden Shears said.

King, the 2006 winner and in the final for a 9th time, was 4th, followed by first-time finalists Murray Henderson, of Feilding, and Pyper.

Mutch first reached the Golden Shears Open final in 2005 and the 2015 final was his sixth, the best previous results having been two fourth placings.

Fagan was honoured on stage to a standing ovation marking the end of a Golden Shears career spanning 35 years.