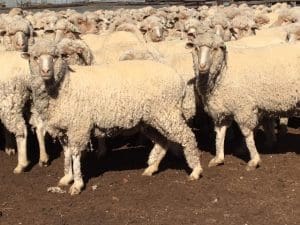 These scanned in-lamb Merino ewes at Collarenebri in NSW sold for $234 on AuctionsPlus last week.

SCANNED in-lamb ewes made up almost half the reduced offering of sheep and lambs and sold for up to $266 on AuctionsPlus last week.

“With lamb price records being smashed in physical markets, the excitement flowed into other sectors and both prices and clearance rates improved, with 80 percent of lots sold,” she said.

Ms Adams said good return for lambs are allowing producers to seek breeders to top up their flocks.

Merino wether lamb numbers were well back this week, with many already been sold to retain core breeders. Prices ranged from $65-$112 and averaged $86, no change on the previous week.