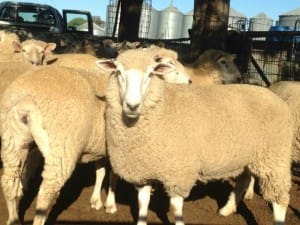 Sheep and lamb numbers rose by 8659 to 50,951 on AuctionsPlus last week. Prices were up across most categories, market operations officer Tom Rookyard said.

Mr Rookyard said sheep buyers last week showed forceful interest for breeding stock in online sales. Scanned ewes met with very keen demand and fetched healthy premium prices. Merino ewes aged 3-4 years ranged from $88.50-$208, averaging $157. The top price for the week of $208 was for a line of Poonginook blood ewes with a 2.5” skin from Narrandera in NSW, scanned in lamb to Border Leicesters. Mixed and older aged Merinos were also in demand, with 4-6-year-old ewes ranging from $70-$176, to average $113. A line of rising six-year-old Merino ewes, also scanned in lamb to Border Leicesters, made $171 on farm. 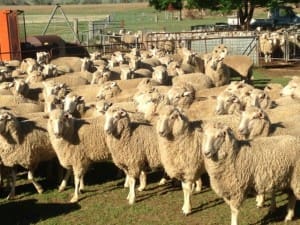 The NLRS said numbers were reduced due to the long weekend coming up. It was a mixed yarding with some excellent heavy weight lambs and a fair selection of trade weights. There was also a reasonable selection of light weights to suit restockers.

The mixed quality yarding of mutton included crossbred ewes that sold $6 cheaper. The medium weight Merinos were firm, while the few heavier weights were up to $7 cheaper. The 3 and 4 score ewes sold from $70-$120 for crossbreds and to $100 for Merinos. Wethers were firm, with the better finished types selling from $92-$112.

The NLRS said lamb quality was fair, with a good number of finished lambs along with the few plainer types. Most of yarding was heavy and extra heavy weight lambs. The usual buyers were competed in a cheaper market.

In Victoria at the Shepparton saleyards on Friday, the agents yarded 1000 lambs, 648 fewer than last week, and 700 sheep, 47 fewer.

The NLRS said the offering quality was very mixed and mostly plain. The market was cheaper, but the sale couldn’t be considered a genuine market indicator due to the limited numbers, plain quality and reduced field of meat buyers operating. The market reached a top of $146 for a pen of export lambs.

Most of the lamb yarding comprised lighter weight and plainer conditioned types that received mixed bidding support from a local processor and restockers. There were a reasonable proportion of Dorper lambs in the offering. Prices generally ranged from $48-$84. A limited selection of well-finished heavy lambs was offered, with about half a dozen pens making from $120-$146. The medium trade lambs sold from $101-$115. A lot of lambs were estimated to range from 480c/kg-530c/kg cwt.

Mutton was also cheaper, but again quality and supply were factors in the trend. A restocker paid the top price of $90 for crossbred ewes. Most slaughter ewes made from $64-$87, with very plain and lightweight ewes from $33-$50.