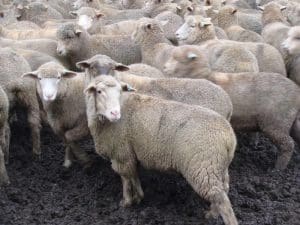 In saleyards, trade, heavy and restocker lamb values continued to climb, with the Eastern States Trade Lamb Indicator finishing last week on 633c/kg, up 6 cents after Friday’s saleyard sales, making a 24-cent rise for the week.

At the Cowra and Griffith markets in New South Wales on Friday, trade and heavy lamb prices rose by around $10-$15 a head, with extra heavy lines making to $230.

The continued strong demand for export-weight lambs from export and domestic processors was also highlighted by a 6-cent lift in the ES daily indicator for heavy lambs, up 30 cents for the week.

The national trade lamb indicator closed the week on 631c/kg, up 7 cents, and the heavy indice finished on 644c/kg, also up 7 cents.

Restocker lambs made the strongest gains for the week, with the ESDI lifting 5 cents on Friday contributing to a 41-cent weekly rise.

After Friday’s saleyard sales, the other lamb ESDIs were Merino lambs on 565c/kg, down 3 cents daily, up 10c for the week, and; light lambs on 601c/kg, up 2 cents on Friday to make a 14-cent increase for the week.

Eastern states mutton prices held firm on Friday, with the ESDI unchanged, but up 15 cents for the week. The national mutton indicator was also unchanged on 413c/kg.

Breeders shaped this week’s sales dominating the market space and strong prices. A line 570 21-23 month-old late-May shorn Haddon Rig blood Merino ewes at Goodooga, NSW, sold for $204. The 47.9kg lwt ewes were mostly score 2 and 3, and were scanned 100 percent in lamb to Border Leicester rams. They were sold to a buyer near Goulburn, NSW.

AuctionsPlus said there were fewer 3-4 year-old Merino ewes listed and these made to $178 for 192 32 month-old mid-August shorn ewes at Narromine NSW. The 56.6kg lwt Egelabra blood ewes were mostly score 3 and scanned 100pc in lamb to Border Leicester rams. A line of 404 3.5-5.5 year-old late-December shorn ewes at Yetman, NSW, sold for $170. The 63.4kg lwt ewes were mostly score 2 and scanned in lamb 159pc to Poll Dorset rams.

Other wethers were on the move, with 620 10-21 month-old Merino wethers at Quilpie, QLD making $70, and heading 1100kms south to Bylong, NSW, which has seen high amounts of rainfall fall in the past eight weeks. The mid-February shorn wethers were 12.7kg cwt and mostly score 1.

Few lines of first cross ewe lambs were offered, but a line of 180 unjoined 8-12 month-old early-February shorn ewes sold for $146. They weighed 44.1kg cwt and were mostly score 2. A line of 260 six-year-old early-September shorn first cross ewes, scanned 1250pc in lamb to Poll Dorset rams sold for $163. The ewes weighed 78.6kg lwt and were mostly score 3.

The National Livestock Reporting Service said lamb quality was very good despite the rain and wet selling conditions. Trade weights and heavy lambs were in good numbers and there was a handy run of extra heavy weights. Store lambs were in limited. All the usual buyers operated in the dearer market.

The NLRS said widespread rain in the drawing area over the previous week dropped the yarding. Lamb quality was similar to previous sales, with good numbers of finished lambs. Heavy and extra heavyweight lambs were again well-supplied, but there were fewer trade weights. Most of the usual buyers were present and competing in a dearer market.