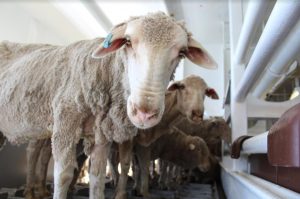 A SAUDI Arabian trade delegation visited Australia this month to discuss live animal exports, but neither the Australian government nor exporters will confirm a timetable for resumption of sheep shipments.

The West Australian last week reported that successful negotiations might lead to a trial live sheep shipment to Saudi Arabia this year, possibly followed by resumption of the trade.

A Department of Agriculture and Water Resources spokesperson said the DAWR and industry supported a visit by a small delegation of Saudi industry representatives and officials from the Saudi Ministry of Environment, Water and Agriculture to Australia this month.

“Departmental staff met with officials from the MOEWA to discuss a range of agricultural trade policy matters of mutual interest, including trade in live animals, as part of our ongoing trade relationship,” the spokesperson said.

Emanuel Exports managing director Graham Daws told Sheep Central in September last year that there had been encouraging discussions between the Saudi industry and Australian exporters.

Live sheep have not been exported to Saudi Arabia from Australia since August 2012 due to the country’s concern that the Exporter Supply Chain Assurance System would impinge on its sovereignty.

But Mr Daws said the Memorandum of Understanding on the Trade in Live Animals signed by Australia and Saudi Arabia in 2005 and amended in 2009, needed to be refreshed and updated. Mr Daws said in whatever form the trade resumes, the pillars of Australia’s Exporter Supply Chain Assurance System ESCAS would have to be maintained.

In 2009, Saudi Arabia was Australia’s third largest Middle Eastern market for live sheep, importing over 576,000 head valued at A$55 million. Nearly 1.2 million sheep a year were exported at the trade’s peak.

Mr Daws last week said it was too premature to speculate on resumption of the Saudi market.

“We have been working on it for some time as you know and will continue to do so.”

Mr Daws refused to comment on RSPCA reservations about the resumption of the Saudi live sheep trade except to say that animal welfare is the live export trade’s highest priority,

“We are highly regulated by the DAWR and they do take action if there are any breaches of regulations or compliance.”

The RSPCA said it is not clear how Saudi Arabia’s reported concerns about the Australian Government’s ESCAS regulations impinging on its sovereignty have been addressed.

“The system has not changed – there is still no reliable process in place to individually check sheep for disease before they leave for the Middle East and the risk of another major incident remains very high.”

Dr Jones also said the sketchy details available of the proposed ‘special agreement’ revealed an alarming, but predictable, lack of basic understanding or concern for animal health and welfare by the exporter.

“Sheep traveling on long-haul voyages during the Middle Eastern summer are also at high risk of suffering and dying from heat stress”, said Dr Jones.

“Government records show that in the past five years, 62,279 sheep have died on journeys to the Middle East. We should be doing all we can to avoid these journeys, not adding to them.

The RSPCA has previously flagged that any watering-down or exemptions for Saudi Arabia to Australia’s ESCAS regulations would be the first steps in bringing the entire scheme undone.

The DAWR spokesperson said exports of livestock for the purpose of slaughter are subject to identical regulatory requirements, regardless of the destination country.

“The regulation of animal health in live exports is established by individual negotiation with Australia’s trading partners and agreed to in protocols.”