A NEW Australian record price of $16,000 for a meat doe was set at the Queensland State Goat Breeders Sale on Monday.

The top sale price for the day was paid for Lot 101, 11 month-old red Boer doe Springvale Sassy, by Carl and Emily Green of Western Bred Reds at Morven in Queensland. The $16,000 price tag was $2000 above the previous national doe record.

Sassy’s breeders Springvale Reds owners Jake and Emma Patterson run goats at Kingaroy and Eulo in south-west Queensland. Emma said the doe is destined for an embryo flush and transfer program.  The Greens have been consistent Springvale goat and embryo buyers as they build their own herd.

The Pattersons described Sassy as “the star of the show” and a stand-out doe with a big future in front of her.

“A powerfully built female that has donor prospect all over her.

“We are confident she will develop into a cornerstone female in any herd,” they said.

Emma said Sassy’s phenotype stood out since she was a weaner and she has also performed in the top 10 percent in her drop on KIDPLAN for carcase traits and her 150 and 180-day weight figures.

“She has ticked all the boxes for her carcase attributes and is a good soft meaty doe.

“She’s got a real wedge body on her.” 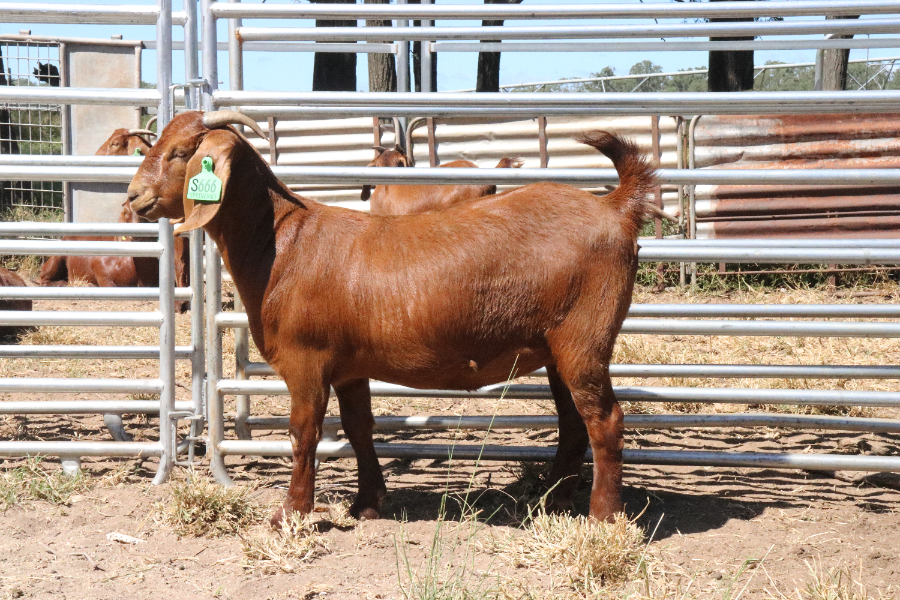 Queensland breeders offered 175 quality bucks, does, and embryos in the sale at the Charleville Showgrounds. The sale was interfaced with AuctionsPlus, with plenty of action on the box assisting the strong auction average of $2,454 and the almost perfect clearance of 99pc. The online catalogue received 2544 views from seven different states.

The Pattersons sold another two does for $9000 each and bucks sold for up to $7000 for Lot 6, Springvale Sheriff.

Over the 3 hours of selling time, 207 users entered the online auction, with 19 active bidders placing 420 bids and securing 31 lots online. The top online purchase was for Lot 107, Springvale Sierra — described as “a flashy red doe” — that sold for $4000 to a buyer from Aubigny, Qheensland. The 31 lots purchased online were split between seven different successful bidders from New South Wales, Victoria and Queensland.

Emma Patterson said the seedstock prices are being driven by meat prices of up to 930c/kg for 7kg-plus carcases at abattoirs. She said the Boer cross goats are having a big impact on the profitability of producers, who are reporting shorter turn-off times, back from 14-16 months for rangeland goats to 9 months for Boer cross goats.

Nutrien Charleville agent Gus Foott said there was a lot of positivity in the goat market at the moment, with TFI opening the Bourke abattoir and the Charleville plant expanding.

“There is a bit of season behind it as well, this recent rain, it’s looking quite positive into the future really.”