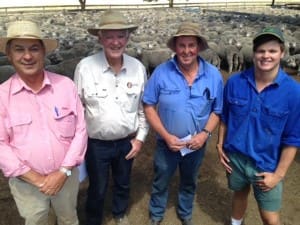 WOORNDOO stud breeder and commercial fine wool grower Peter Coy would prefer that the Merino ewes he sells at his annual sale were all joined to Merino rams.

And he will be producing more first cross ewes next year for prime lamb breeders after a good response from buyers.

At the Salt Creek on-property sale on Thursday, Mr Coy said he was always encouraging people to stick with Merinos and he offered flock rams for half price to any ewe buyers.

“Most of our ewes seem to go to terminal sires.”

But he is still positive about the state of the wool industry and fine Merino fleece prices.

“But we are going to be breeding a few more of these (first cross ewes); we’ve got 700 coming up next year, people love these Border Leicester-Merino ewes,” he said.

“But I love my Merinos and well-bred Merinos can handle a tough year.” 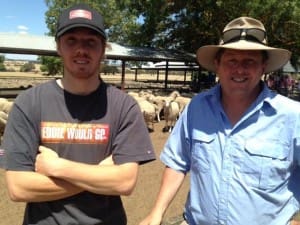 Mt Emu prime lamb producer Chris Bruty with his son Wayne bought the 247 September 2014 drop first cross ewes for the second consecutive year. They paid $220 for the October shorn ewes and will join them to White Suffolk rams.

The one-year-old May shorn Salt Creek Merino ewes made to $102, with first-time buyers John Watt and his son Lachie from Kaburnie Pastoral, Penshurst, buying a run of 200 for the first time to lift ewe numbers in their Gleneden blood flock.

“I reckon they are good buying at that,” Mr Watt said.

“The wool job’s good and I think it will get better.”

The 1002 2011-drop May shorn Merino ewes sold on two runs; 250 for $138 to an Elders Warracknabeal client and Darlington wool producer Tom Calvert paid $136 for the remaining 752. Another line of 510 2011-drop Merino ewes sold for $114 through LMB Linke Livestock agent Derek Morse from Hamilton.

The five-year-old Merino ewes sold in three runs; with 200 going for $110 to a Fox and Lillie Rural client, 250 making $108 with Tom Calvert and an Elders Ballarat client paying $88 for the remaining 227.

Elders auctioneer Graeme Nicholson said the old ewes sold particularly well and the first cross ewes made “good market value” to repeat buyers. He said the season dictated the price of young sheep this year, and of the one-year-old Salt Creek ewes.

Mr Coy said Salt Creek would normally be keeping all the one-year-old ewes, less culls, but decided to cut numbers due to the season.

“People must have been nervous about buying the young sheep because of the tough season we are having and thinking these would be hard to look after.

“But they won’t be, I reckon if you shear these in January and then every eight months you will get some valuable wool off them and give the sheep a chance to grow.”

Mr Coy said it had been a tough autumn, pretty poor winter and a really hard spring, but the ewes had been well prepared by his manager Tom Wilson and overseer Rick Keilor, and well-drafted by Elders Mortlake agent Hayden Lanyon.

“So here we are in the worst spring with about 2mm of rain for October and I’ve got 10,000 lambs down there, so these sheep are all for genuine sale.

“They joined up well and we probably only had 20 points of rain the whole time they were lambing – the weather didn’t hurt them but it didn’t grow us any grass either,” Mr Coy said.

“We were worried about them joining up but I said to Tom don’t worry about it – I’ve never criticised anyone for feeding sheep.

“So he fed them really well during that critical period in March when the rams were out and they just cycled well and at the other end the weather was very kind so we didn’t lose any, ” he said.

“We feed them well leading up to lambing too and that helps develop the embryo.”