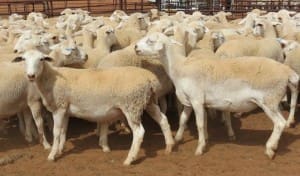 However, secondary lambs showing the effects of the dry and hot weather in all states are being discounted more by processors looking for better finish and carcase yield, and by restockers or feeders looking for lambs in good condition.

In South Australia, the NLRS said the over-the-hook trade and heavy lamb categories eased an average of 3c/kg cwt this week, while light weight and Merino lambs were unchanged. Mutton over-the-hook indicators were steady week-on-week.

The NLRS said it was a pretty good quality yarding, with a good number of heavy weight lambs and a fair selection of trade weights. There was a limited number of Merino lambs.

There were some good lines of heavy weight crossbred ewes and Merino sheep, and a fair percentage of light weights in the mixed yarding. With the absence of one regular buyer, lightweight sheep were $10 cheaper, while the better heavy weight sheep were $6-$10 dearer. The 2 score ewes sold to processors made $20-$65. Better 3 and 4 score crossbreds sold from $38-$103 and to $111 for Merinos. Merino wethers sold to $105.

The NLRS said the quality of the lamb penning was very mixed, with a large percentage of crossbred lambs showing the effects of the poor seasonal conditions. Quite a few Dorper lambs were penned, but there were limited supplies of good quality well-finished trade and heavy weight second cross lambs available. The usual butchers and processors attended, but restocker competition was minimal.

The NLRS said lamb numbers eased and quality varied, with some lambs showing the effects of the season. There were large drafts of heavy and extra heavy lambs, and smaller drafts of well-finished heavy trades. Lighter trade weights were in short supply, but there were plenty of store lambs. All the usual buyers operated in a dearer market.

Sheep quality was very mixed. Most were ewes and prices were cheaper. Medium weights sold from $52-$78 and heavy crossbred ewes made to $103. Most of the better covered sheep made 260-280c/kg cwt.

The NLRS said lamb quality deteriorated, with fewer heavy lambs coming forward off grain and lucerne following last week’s cheaper rates. Most of the lighter lambs showed the effects of the ongoing dry and hot weather.

Quality was a factor in price, with the best slaughter lambs similar to last week, but plainer and drier types averaging $2-$3 easier. Light lambs sold well in comparison, with the main runs of store lambs in the 12-16kg category averaging $7 dearer.

Quality and weight tailed-off very quickly and the limited pens of heavy trade weight lambs sold from $122-$145, with the major domestic buyers pushing into more weight again this week to access better carcase finish. However, most trade weight lambs were plainer types showing dryness and sold from $100-$120. On a carcase basis, the best crossbred trade lambs returned around 530c/kg, but across the yarding most made 485-510c/kg. Light lambs were well-supported by restockers and processors, with most sales from $80-$96. The best trade weight Merino lambs in a big skin sold to $133, with plainer and lighter types from $86-$113.

The better yarding of sheep had more lines of Merino wethers and ewes. Like recent sales, not all the major exporters operated. Prices over most mutton categories were $2-$5 weaker. Heavy crossbred ewes sold from $76-$96. The best Merino wethers sold to $98.60 and ewes made to $85. Better quality mutton was estimated at 280-310c/kg.

The NLRS said the average to good quality yarding included all weights and grades. The usual buyers operated in a generally firm lamb market.

The NLRS said the same small field of trade and processor buyers were active, with some restocker orders. Lamb quality was very mixed.

The NLRS said lamb supply lifted strongly, with more light weight and store drafts. Lamb quality was mixed, with good supplies of well-finished trade and heavy weights. The large numbers of plain, secondary and light weight store lambs included very light Merino drafts. All the usual buyers were present, but were more selective. Prices remained firm for most categories, with the exception of air freight drafts which lifted with increased competition.

Ewe numbers increased and included some good heavy drafts and the usual plain and light lines. Merino ewes sold to restockers for $16 and $40. Ewe prices varied, with the light weight drafts selling from $15-$45, to be back slightly.

The 2 score processor mutton made $40-$75 to remain firm, with the better conditioned and heavy weight drafts making $65-$75, marginally dearer than last week.

Wether and ram numbers were similar. Wether prices remained close to firm, with the better export weight wethers making $85-$99 and store and lighter wethers from $45-$90. Limited live export activity was evident on the wethers, but there was solid demand for rams. Ram lambs sold from $60-$90 and younger rams sold to live export for $45-$80. Old rams sold to processors for $10-$35.

In northern Tasmanian at the Powranna and Killafaddy saleyards on Tuesday, the agents yarded 770 lambs, 280 fewer than last week, and 540 sheep, 510 less.

The NLRS said lamb quality was very mixed, with many woolly lambs included in the yarding.