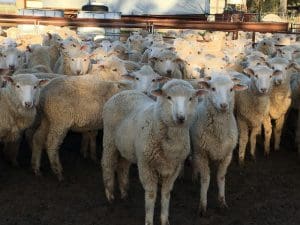 Prices improved for quality light, trade and heavy lambs at Dubbo on Monday, but demand generally weakened at many centres as processor winter closures continued, driving industry indicators down.

Early new season lambs are coming into more markets, but in very small numbers – at Tamworth and Forbes in NSW, the South Australian Livestock Exchange and at Bendigo and Ballarat in Victoria.

Over-the-hook rates for lambs were unchanged to higher in most states, reflecting continuing demand for direct supplies from processors.

This trend weakened on Tuesday, but the main slaughter lamb categories continued to lose ground. After Tuesday’s saleyards sales the ESDIs for lamb were: restocker 584c/kg, up 5 cents; Merino 588c/kg, up 6c; light 593c/kg, down 4c; trade 631c/kg, down 1c; heavy 642c/kg, down 6c.

The ESDI for mutton closed on Tuesday down 5 cents to 392c/kg.

The NLRS said lamb quality was good, with plenty of heavy and extra heavy lambs. Trade weights in good condition were limited and there were good numbers of store and light processing lambs. All the usual buyers operated in a dearer market.

Sheep quality was again mixed and fewer heavy sheep were penned. Merinos with longer wool sold to a dearer trend and plainer crossbred ewes were firm. Medium weights sold from $74-$129 and heavy Merinos made to $160. Most sold from 380c-440c/kg on average.

The NLRS said lamb quality was mixed but there were some excellent pens of extra heavy lambs and a good supply of trade lambs and plainer lines. All the usual buyers attended and competition remained strong in a slightly cheaper market.

Sheep quality was mixed, with all weights and grades represented. The top crossbred and Merino ewes were cheaper, making to $140, and hoggets sold to $152.

The NLRS said it was a very mixed quality penning of lambs comprising good supplies of well-finished second cross trade and heavy weights. Condition ranged from plain to very good.

Processor demand was much weaker for the increased supply, with market trends cheaper. The well-finished good quality crossbred lambs in the trade weight category were $14-$18 cheaper. Secondary quality trade weights experienced greater falls. Heavy and extra heavy weight lambs also experienced large price falls, down as much as $20, while quality variations added more-the negative price change in some cases. Restockers were active on the plainer condition lambs, while some finishers opted for heavier weights requiring less time for finishing.

The NLRS said lamb quality was mixed with well-finished and plainer lambs offered. Most were heavy and extra heavy weights. The usual buyers competed in a cheaper market.

The NLRS said it as a rain-affected yarding. The lambs were mainly trade weights and a few light lambs. Fewer heavy lambs were offered. The market varied, with light and light trade lambs selling firm to slightly dearer and heavy lambs holding firm. Sheep quality was very mixed and prices changed little.

The NLRS said it was a typical winter yarding of very mixed quality including many small pen lots as producers sell the last of their old season lambs. The market fluctuated, opening cheaper before improving to record some very strong sales for domestic lambs late in the auction. The erratic flow of the sale, coupled with quality issues, resulted in some mixed price results.

The pick of the trade weight slaughter lambs were firm to a few dollars dearer, while the general run of medium and light weight lambs averaged below the buoyant results of a week ago. The Merino section was dominated by light weight pens under 16kg and these suffered the biggest price corrections amid much weaker demand for slaughter types.

Prices reached $200.50 for a line of export lambs estimated at around 30kg cwt. It was the only sale to break $200, with most of the extra heavy lambs ranging from $176-$190 depending on type, quality and number in the pen.

The strongest bidding was on heavy and medium trade weight lambs, with domestic buyers paying to $182. The pick of the heavy domestic lambs, with good fat cover and in shorter skins, sold from $160-$182 at an estimated 660c/kg cwt, with select lines over 700c/kg. Prices varied in the general run of trade lambs, with cwt rates varying from about 610-640c/kg. There was a definite price correction on lighter and plainer lambs under 20kg as bidding weakened for slaughter types.

Sheep quality was mostly average, with very few lines available. Prices were similar to cheaper in places. Extra heavy crossbred ewes sold from $108-$135. The best pens of heavy shorn Merino ewes made $93-$114 and ewes with a skin return topped at $127.

The NLRS said lamb quality was average, with more plain types. The usual buyers attended, plus some extra competition, although not all operated fully.

The trade and heavy weight lambs generally sold firm on last week, with plainer lighter drafts settling up to $5 easier. The best heavy lambs sold to $199, with the better covered heavier trade weights making $149-$178 and averaging around 665-670c/kg. Lighter Merino lambs sold from $60-$93 and were a few dollars easier. Feeder buyers were again very active and paid from $110-$158. Restockers paid $84-$127 and a Gippsland buyers was particularly active.

The NLRS said the generally poorer quality yarding crossbred and Merino lambs sold to easing competition from the usual trade and processor buyers, with one notable processor absent due to a maintenance break.

Heavy weight crossbred lambs were the most affected by the waning processor interest and they eased substantially. Merino lamb prices were generally easier but not to the same extent as the crossbreds. Feeder buyers were surprisingly active on light weight crossbreds at dearer rates and the first new season lambs were offered, they attracted bidding from $102-$130. Light weight crossbreds suitable for feeders sold from $76-$118. Light weight lambs sold to processors attracted solid bidding at $100-$122 and averaged 552c/kg. Light trade weight 3 scores sold from $110-$122 to average 588c/kg. Heavy trade weight 4 scores eased $9 to $130-$156 and averaged 569c/kg. Heavy weight lambs eased $14-$25, selling from $143-$178, or 560-570c/kg. Light weight Merino lambs sold to feeders and restockers for $49-$88. Full wool lambs sold to restockers made to $103. Trade weight Merinos sold to processors for $105-$120, averaging 545c/kg. Heavy weights eased $3 to $128-$144, averaging 509c/kg. Hoggets were plentiful, heavy weight Merinos making $112-$134 and crossbreds $103-$108.

The NLRS said the usual trade and processor buyers attended, but not all were fully active. A small number of restocker orders also competed for the very mixed quality lamb penning, but prices eased. Lightweight crossbred lambs sold to the trade for $100 and a small number purchased by restockers made $76-$96. Lightweight trade 2 and 3 score lambs sold from $108-$114 and similar Merinos made $88-$95. Trade weight 3 score lambs range sold from $121-$136, averaging close to 600c/kg cwt. Heavy lambs sold from $131-$157 and the few extra heavy lambs made $156-$184. All lambs were up to $5 easier in price overall. Hoggets ranged from $105-$128.

The NLRS said crossbred lambs made up close to 60 percent of the yarding. Quality was mixed, but there were good supplies of heavy and trade lambs, and reasonable numbers of light weight and store drafts.

Ewe weight and quality was good, with some drafts having close to full wool. Wether prices remained firm, with live exporters and feeders competing for suitable drafts. Heavy bare shorn export wethers sold to $105 and longer wool drafts made to $117. Lighter weight and store wethers made $75-$107, depending on finish and wool length. Ram prices were again driven by export feeder demand. Ram lambs sold from $75-$108 to processors, export feeders and live exporters. Older rams made $65-$102, mostly to exporters, and old rams sold to processors for $45-$80.

At the northern Tasmania saleyards at Powranna and Killafaddy on Tuesday, the agents yarded 695 lambs, 555 fewer than last week, and 450 sheep, 250 less.