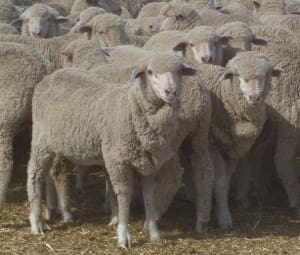 SLAUGHTER lamb prices edged slightly higher in saleyards this week, as yardings at most eastern states’ centres continued to fall.

Not all the usual domestic and export buyers were active at all saleyards and restocker enquiry was also more selective.

Skin values helped Merino lambs prices this week and rates for other light and restocker lambs fell $2-$4 at Dubbo and $12-$14 at Naracoorte, but were firm to dearer elsewhere.

After Tuesday’s saleyard sales, most NLRS Eastern States Daily Indicators moved slightly upward, except for restocker and Merino lambs. The lamb indicators are: restocker 506c/kg, down 8 cents; Merino 469c/kg, down 4c; light 485c/kg, up 1c; trade 505c/kg, up 2c; heavy 501c/kg, up 1c. The national trade lamb indicator improved 2 cents to 503c/kg and the heavy indice was firm on 500c/kg.

The ESTLI for mutton lifted 4 cents to 320c/kg and the national indicator rose 5 cents to 321c/kg.

The NLRS said it was a very mixed yarding with some top heavy weight lambs and only a fair selection of trade weights. A good percentage of the lambs lacked finish.

The NLRS said lamb quality was fair to good, with a reasonable selection of well-finished, quality lambs for the usual buyers.

The NLRS said lamb quality was similar to previous sales. There were some good runs of well-finished lambs and a large percentage of plainer drier types. Heavy and extra heavy weight lambs were well-supplied. An extra buyer competed in the firm to dearer market.

The NLRS said there was a much smaller yarding of lambs and sheep despite the break in selling coming during the Anzac Day holiday next Monday. Lamb quality was plainer, with fewer well-finished trade and export slaughter lambs. The market was stronger, though not all the regular domestic and export orders were active.

Bidding was most robust on quality trade weight lambs, which were $3-$5 dearer. Competition on heavier lambs over 26kg cwt remained selective, although these classes still recorded price gains compared to a week ago.

Light weight lambs sold firm to a few dollars dearer to processors and restockers. The market reached a top of $170 for heavy export lambs weighing over 32kg cwt. There was a noticeable decline in the supply of heavy lambs, with about six pens over 30kg which made up to $170. There were some flat spots in bidding for the next run of lambs weighing 26-30kg, although the best quality pens averaged dearer than last week. The best pens of trade weight lambs in fat score 3 and 4 condition sold from $118-$144, or around 500-530c/kg.

Processors and restockers competed keenly for well-bred light weight lambs at $80-$103 at the top end of the market. Smaller and plainer lambs made $48-$65. Store lambs went to Swan Hill, Echuca, Bendigo and Shepparton. Trade weight Merino lambs with a high value skin sold to $118. More than 200 young Merino ewe lambs went back to the paddock at $113, boosting the restocker price average for the category.

The sheep were mostly small pen lots of crossbred and Merino ewes, with just an odd bigger line of Merino wethers and ewes. Prices for heavy crossbred ewes were cheaper, while the general run of trade and light weight mutton sold at rates similar to last week.

Ballarat’s heavy lambs lift up to $10

The NLRS said an average to good quality lamb yarding was offered to the usual buyers.

Most agents yarding lead pens of extra heavy export lambs were of outstanding quality and finish, with estimated carcass weights around 35kg. These lambs sold to $183, with eight pens selling over $165 and three lines making above $180.

Lambs generally sold to a dearer trend, with the better covered trade weight lambs $2-$4 dearer. The heavy and extra heavy lambs were mostly $3-$5 and up to $10 dearer. Restockers and feeders competed against processors for the large numbers of suitable lambs. Restocker lambs mostly sold from $80-$118 with lighter lots making $52-$80. Restockers paid from $32-$55 for light young Merino lambs and $80.50 for first cross ewe lambs.

The NLRS said the mixed quality crossbred and Merino lambs sold to weakening demand from the usual local and interstate trade and processor buyers. There was no supermarket involvement and two prominent wholesalers didn’t operate on what was a good selection of supplementary fed crossbred, trade weight lambs. There was sporadic feeder and restocker interest on crossbreds and the many light weight Merinos yarded attracted speculative bidding.

The NLRS said fewer trade and processor buyers attended and not all operated fully. There were also fewer restocker buyers and light lamb prices dropped.

Muchea’s light lambs up to $7 dearer

The NLRS said widespread rain had little effect on the supply. Very light and store lambs were available in large numbers and the prime lamb supply was adequate with continued solid direct-to-works deliveries.

Very light lambs were mostly dearer, with the Merino drafts making $25-$70, up to $7 dearer. Light lambs sold firm to restockers, feeders and air freight processors at $65 and $93.

Ewe mutton sales were strong, with all categories dearer due to increased competition. Light weight drafts made $26-$62, up to $8 dearer. The 2 score medium weight processor mutton sold from $50-$75 to be marginally dearer. Better conditioned and heavy weight ewes lifted $4 to $75-$96, with the dearer ewes having almost full fleeces. Restockers limited their purchases, with ewe hoggets making $30-$55 and bare shorn mature ewes $25-$77.

Wether numbers were limited and they sold at similar prices. Better export quality wethers made $85-$95. Those suitable for restockers and feeders sold from $55 for light weight store drafts up to $101 for longer wool drafts with good frame and condition. Ram prices were equal week-on-week with ram lambs selling to processors for $106 and younger rams suited to live export and export feeders making $35-$80. Old rams sold to processors for $5-$25.