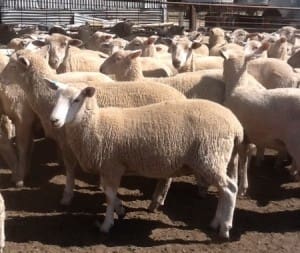 SLAUGHTER lamb prices lifted in Victoria, but were firm to cheaper in New South Wales saleyards mid-week as sales recommenced after the Easter break.

With more lambs yarded in most centres since their last sale two weeks ago, including 13,400 more at Wagga on Thursday, some major domestic processors were very selective.

In New South Wales trade lambs generally sold firm to $1-$4 cheaper, heavy lambs were up to $5 cheaper and processor demand was also weaker on light lambs.

But in Victoria, prices were firm to dearer for light and trade weight processing lambs, tending to equalise with the NSW rates, but slightly dearer – 20-40c/kg — by comparison on secondary lambs. Hamilton’s trade lambs improved $4-$6 and light lambs sold $5-$9 dearer.

Restocker demand continued to be strong in the eastern states, with buyers travelling from interstate to NSW and Victorian saleyards to pay up to 580-690c/kg for select lines at Wagga, Carcoar and Hamilton, and especially seeking lines with a good fleece return.

The ESDI for mutton finished on 302c/kg, up 2 cents, and the national indicator also rose 2 cents, to 300c/kg.

The NLRS said the fair quality yarding had some good runs of trade weight lambs and a good selection of lighter lambs to suit restockers and processors. Extra heavy weight lambs were in limited supply.

With the lamb sale resuming after the Easter holiday break, numbers lifted considerably. Quality was quite good over all weight categories. Grain-fed and lambs finished on lucerne attracted the best competition and demand was solid for the plainer types. Not all buyers operated fully, with major domestic processors notably selective.

Merino trade lambs were keenly sought with large numbers in full wool. Merino trade lambs sold from $98-$130. Lighter weight lambs suitable to restock or feed, sold to orders from Birchip, Ballarat, Echuca, Forbes and the local area. Plainer light weight lambs struggled to attract demand, with prices easing up to $9, while well-bred lambs were unchanged at $102-$118.

Heavy and extra heavy lamb numbers increased, with plenty of weight and yield on offer, and a good selection over 30kg cwt. Heavy lambs sold $5 cheaper to average 510c/kg cwt. Extra heavy lambs sold to strong demand from a single major exporter, which helped prices firm as the sale progressed. Sales ranged from $140-$184, to average around 480-504c/kg.

The mixed quality offering of mutton had all weights and grades represented. Heavy mutton was mostly unchanged to average 308c/kg and sell from $85-$109. Trade categories sold to fluctuating prices, with buyers keen to purchase the longer wool lines. The better-covered trade sheep made from $70-$96. Plain light weight ewes were keenly sought after, lifting $3-$6, and making from $32-$64.

The NLRS said most of the regular buyers attended the first sale after the Easter break. Quality was average to good with trade weight and heavy lambs in reasonable numbers.

Well-conditioned sheep continued to sell to strong demand, with graziers locking in the store lines. Mutton prices eased by $5-$10, with light ewes selling from $39-$41. Ewes sold to restockers for $20-$45. Plainer light weight wethers sold to restockers and feeders for $29 and quality lines made up to $103. Wethers sold to processors for $45-$90. Young rams sold restockers for up to $85 and processors paid $5-$30 for older lines.

In Queensland at the Warwick saleyards on Wednesday, the agents yarded 1775 lambs and hoggets, and 398 sheep.

Prices were fully firm with lighter lambs a shade dearer for the similar yarding of lambs and a smaller sheep offering. The top-priced crossbred lambs made $137 for D.J. and N.A. Lindsay of Warra.