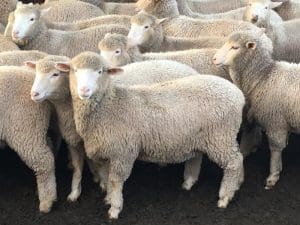 Increasing numbers of new season lambs are being yarded in saleyards in New South Wales, Victoria and South Australia, with the National Livestock Reporting Service reporting agents suggesting some producers are marketing lambs earlier because of the strong carcase rates being paid.

After Tuesday’s saleyard sales, the Eastern States Daily Indicators for the lamb categories were all higher, except for Merino lambs. The ESDIs for lambs are: restocker 548c/kg, up 21 cents; Merino 558c/kg, down 3c; light 55c/kg, up 9c; trade 621c/kg, up 9c; heavy 631c/kg, up 3c. The national trade lamb indicator rose 9 cents to 623c/kg and the heavy indice closed up 2 cents to 631c/kg.

The ESDI for mutton finished up 2 cents to 384c/kg and the national indice rose 1 cent to 382c/kg.

In New South Wales, the NLRS quoted over-the-hook lamb indicators as unchanged this week, due to all taking a wait-and-see approach. Merino lamb rates eased, as did medium and heavy weight mutton quotes.

In South Australia, the NLRS said trade and heavy weight lamb over-the-hook indicators lifted an average of 7c/kg cwt week-on-week, while light and Merino lambs were firm. Mutton indicators were unchanged across all weight range categories.

The Western Australian OTH rates were not available when this article was published.

The NLRS said the lamb offering reduced due to continuing wet conditions hampering truck access. Quality was mixed. The yarding consisted of mainly good trade lambs, quite a few secondary lambs, fewer heavy weights and some of the first new season lambs. Export processors attended but were not active due to plant maintenance or killing contracted lambs.

Sheep quality was mixed, with all weights and grades represented. Not all exporters operated on the mutton. Heavy Merino ewes sold to $125 and crossbred ewes made to $113.

Demand was strong for the well-finished trade and heavy weights with prices firm to slightly dearer in places. Light store lambs also attracted keen competition from restockers to put on crops.

The mixed yarding of sheep consisted mainly of medium weight lines and a few pens of well-finished heavy mutton. Most sheep sold similar to last week.

The NLRS said lamb quality reduced, with more plainer lambs penned with the well-finished lots. Most lambs were heavy and extra heavy weights. The usual buyers competed in the firm to slightly dearer market.

The NLRS said quality improved for the best yarding held at the centre this winter. The offering included about 900 head new season young lambs which displayed good finish and carcase quality. All the regular buyers attended in a strong market that matched recent local sales, although prices showed some corrections when compared to the last sale a fortnight ago.

The heaviest of the old season lambs sold to $176 and the best heavy trade weights made $140-$170. On a carcase basis, quality old season lambs made 610-640c/kg. Plainer and secondary lambs, and odd pen-lots of a few head sold at lower rates according to size and quality.

The sheep some good lines of Merino ewes. Prices were solid, with the main lines of heavy Merino ewes selling from $93-$135, to average an estimated 385c/kg.

The NLRS said it was the smallest lamb yarding this winter. There was some well-finished lambs off grain, but quality tailed off very quickly into small and mixed pen-lots as the last of the old season lambs are cleared out.

The market was dearer by about $5-$10, regaining some of the previous week’s losses, with reports the wet weather has again disrupted the movement of stock to abattoirs. Some domestic buyers purchased lambs that were trucked out for an immediate kill.

Buyers remained cautious on lamb skin values, with most still working on returns of just $3-$7.

The market reached a top of $210 for export lambs estimated to weigh 31kg. It was the only sale over $200, with most heavy lambs above 26kg cwt, selling from $170-$196. Bidding was keenest on supermarket-style lambs, with the best pens making $140-$170 at up to an estimated 680c/kg. Once prices from the general run of trade weight lambs were mixed in, most slaughter lambs over 22kg were averaging from 630-650c/kg.

About 400 new season young lambs were yarded and the best heavy trade weights made $161. Most of the new season lambs were lighter types, sometimes lacking finish, with agents suggesting the strong carcase rates are encouraging some farmers to sell early. Competition for light kill lambs was more animated than in the previous fortnight, with most sales from $85-$118.

Not all the usual buyers operated on the sheep. The mutton market showed a cheaper trend, particularly on pens of extra heavy crossbred ewes, which made $100-$116. Some quality lines of Merino wethers not available at recent sales sold from $110-$125.

The NLRS said lamb quality ranged from plain to a few pens of well finished lambs for the usual buyers.

The NLRS said the usual trade and processor buyers attended, but not all were active. There were several restocker orders. Quality fell, with most of offering Merino lambs.

Medium weight wethers sold from $80-$110, with some restocker activity. Some excellent pens of heavy Merino wethers made $119-$142, bucking the easier trend to improve in price.

The NLRS said the lamb yarding included a few new season drafts and quality overall was mixed, but mostly plain to average for the usual buyers.

Lamb prices remained unchanged. Buyers advised short length lamb pelts are worth from 0-$2, with best full wool skins valued at up to $7. The few light new season lambs sold for $102 and trade weight 3 scores made $150. The one pen of heavier 4 scores made $162.

Processors remained competitive, but the lighter and air freight lamb categories sold easier due to maintenance shut-downs. Lamb prices moved higher towards the end of the sale as buyers pushed to secure adequate numbers.

There was a limited number of new season lambs, with most being lighter weight drafts that made $50-$85. Best trade weight new season lambs mostly made $90-$117, with one heavy draft making $128. Light store lambs sold firm to marginally easier to restockers for $37-$80. Light lambs sold to processors and feeders eased $2-$5 to mostly make $66-$96. Trade lamb sold from $85-$121, with the better prime drafts up to $3 dearer, but the plainer drafts eased by a similar amount. Heavy lambs sold from $110-$129 to be $3 dearer due to better average weights.

Ewe weight and quality was mixed, but some good drafts were offered. Wether, hogget and ram numbers were solid, and firm prices were offered by a strong field of export buyers. The strong wether and ram prices were driven by export demand. Export weight wethers made $90-$127, up $4-$5, with the dearest wethers having big fleeces. Lighter and store wethers sold to feeders made $70-$107, depending on weight and wool length. Wether lambs made from $85-$123 which helped drive lamb price movements. Ram lambs sold from $75-$111, driven by processor and live export competition. Young rams suitable for export feeders made $45-$97, lifting around $8. Old rams sold to processors were $20 dearer at $65-$85.

In Tasmania at the Powranna and Killafaddy saleyards on Tuesday, the agents yarded 800 lambs, 500 fewer than last week, and 800 sheep, 200 more.

All the sheep sold to strong export competition with prices similar to last week, although there weren’t the very heavy sheep from last week. Light sheep sold for $54-$91, medium weights $75-$96 and heavies $98-$99. A couple of pens of ewes due to lamb in August made $78-$80.