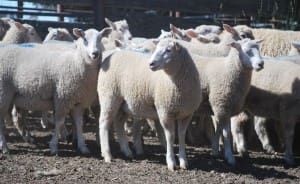 SLAUGHTER lamb prices slipped further in saleyards mid-week as up to half of some yardings were made up of lighter lambs suitable for store buyers.

Quality new season trade lambs at Hamilton on Wednesday were least affected by the lower price push. However, lambs in all states are getting drier in the skin and with not all domestic and export processors operating fully at many yards, pasture/crop restocking and feedlot buyers were also able to pay less to fill orders.

After Thursday’s saleyard sales, the National Livestock Reporting Service quoted its Eastern States Daily Indicators as lower for all lamb and mutton categories, except restocker lambs.

The ESDI for mutton lost 10 cents on Thursday to close on 292c/kg and the national mutton indicator finished on 291c/kg, down 11 cents.

In New South Wales at the Central Tablelands Livestock Exchange at Carcoar on Wednesday, the agents yarded 17,500 lambs, 4250 more than last week, and 7500 sheep, 3500 more.

The NLRS said it was a plain quality yarding, with very limited numbers of ideal trade and heavy weight lambs. More than half of the yarding was light lambs suitable for the store buyers. Not all the regular buyers were operating in a weaker market, with many lambs returning to the paddock.

The NLRS said lamb numbers increased due to the looming Christmas holiday break. Producers off loaded more secondary lambs, with well-finished, heavy and extra heavy export lambs in short supply. The usual export and domestic buyers attended, but not all operated fully.

Heavy lambs were keenly contested, with prices firming as the sale progressed. Heavy lambs made from $142-$170, with a single pen of 200 lambs estimated at 32kg cwt recording a top price of $175.

Merino wethers were keenly sought by restockers due to the cheaper price trends. Mutton sold to weaker demand, with prices generally $8-$10 cheaper. Trade sheep were well-supplied, making $54-82, or 273-309c/kg cwt. Heavy ewes made from $74-$93, averaging 272c/kg. The better conditioned wethers returning to the paddock made $62-$76.

In Victoria at the Hamilton saleyards on Wednesday, the agents yarded 52,218 lambs, 6413 fewer than on Monday.

The NLRS said lamb quality varied from very good to mainly average with some plainer lambs. Most weights and grades showed further signs of more dryness in their skins and less condition score. Close to half the offering was made up of well-bred light 1 and 2 score lambs ideal for restockers. An almost full complement of processors attended, but not all operated fully. Store buyers came from the Wimmera, Ballarat, Warrnambool, Albury, South Australia and locally.

Lamb prices were unchanged to slightly weaker by $1-$2, but in some cases firm in later sales on better quality heavy lambs. Medium trade weights were $2-$3 cheaper and lighter weight lamb prices eased by $2-$6 compared to last Wednesday’s record yarding.

The NLRS said lamb quality was average to good, with most of the regular buyers operating in a firm to easier market. The proportion of shorn lambs in good condition increased.

Unshorn lambs sold to $145 and the best shorn lambs made $144. Restocking activity was limited, with these lambs – shorn and woolly — selling from $70-$98.

The NLRS said sheep quality was mixed. After the turn-off and weaning of their lambs, crossbred and Merino ewes of all weights and grades were well-supplied. All the regular buyers attended, but not all operated, and most categories sold to a cheaper trend. Light and medium weight trade sheep, as well as similar weighted Merino wethers, were all $5-$10 cheaper. Heavy weight lines also declined, easing $10-$15.

The NLRS said it was a mixed quality yarding for the usual buyers at Katanning. Graziers bought discounted unfinished lambs. Light weight new season lambs sold from $55-$85 and the trade weights made $88-$125. Heavy weight lambs sold for $118-$127. Lambs suitable for air freight sold from $70-$93. Store crossbred lambs sold to restockers and feeders made from $11 and immature lambs sold to $71. Merino store lambs sold from $10 for very light weights up to $103 for quality lambs.

In Queensland at the Warwick saleyards on Wednesday, the agents sold 1926 lambs and hoggets, and 481 sheep

The market was firm for all descriptions in the larger yarding of sheep and lambs. The top 57.7kg lwt lambs sold for $149 for the Perrottet Pastoral Co of Dirranbandi.