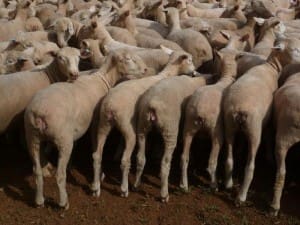 The lamb offerings jumped 30-50 percent at Cowra and Griffith on Friday, in the centres’ last sales before Easter.

The ESDI for mutton finished 2 cents down to 285c/kg and the national mutton indicator closed down 2 cents to 284c/kg.

AuctionsPlus sheep and lamb listings dropped by 35,224 to 47,391 head last week, in two sales on Tuesday and a Thursday sale.

The listings were dominated by Merino ewes and good drafts of Merino wether lambs.

Young Merino ewes averaged $109 and made up to $153 for 332 22-24 month old mid-July shorn ewes at Yerong Creek, New South Wales. The young ewes weighed 58.8kg lwt, were mostly score 2 and 3, and all scanned in lamb to Border Leicester rams.

Aged Merino ewes made an average price of $95 and were supported by high numbers throughout last week’s sales. The top price again hailed from South Australia – Booborowie – where 330 7-8 year-old mid-January shorn Collinsville blood Merino ewes made $118. The ewes weighed 62.2kg lwt, were mostly score 2 and 3, and all scanned in lamb to White Suffolk rams for Spring/Summer drop lamb.

Crossbred lambs to $11o on AuctionsPlus 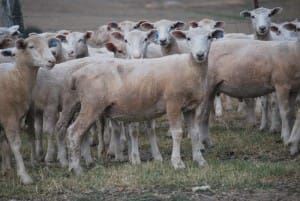 First cross ewe lambs were also short in supply online this week, but strong prices made up for the lesser number. The top price for this category was $140.50 for 290 July-August crop early December shorn ewe lambs at Wakool, NSW. The lambs weighed 39.3kg lwt and were mostly score 2. At Nyngan, 200 July-August drop mid-December shorn first cross ewe lambs, 44.1kg cwt and mostly score 2, sold for $120.

There was a good offering of first cross breeders from southern states on AuctionsPlus, including a line of 90 mid-March shorn 4.5 year-olds at Lake Cargelligo, NSW, that sold for $149. The ewes weighed 82.8kg lwt, were mostly score 5 and scanned 124pc in lamb to White Suffolk rams.

The NLRS said lamb quality was very good, particularly in the heavy lambs which had plenty of weight and condition. Mainly heavy lambs were penned, trade weights were limited in supply and there was a reasonable run of stores. All the usual buyers operating and competition was a little easier resulting in a firm to slightly cheaper trend.

Sheep quality was quite good and medium Merino ewes averaged $79 or 280c/kg cwt. Heavy first cross ewes mainly sold from $79-$85 or around 295c/kg.

The NLRS said heavy and extra heavy lambs were well-supplied and quality was very good. Most came off feeders. Trade and store lambs were in short supply. There were several good pens of Merino lambs with plenty of weight. Not all the usual buyers operated in a cheaper heavy lamb market.