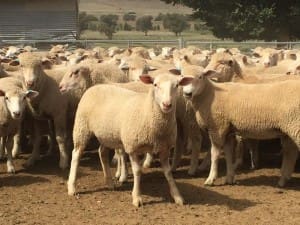 SLAUGHTER lamb prices in saleyards were mostly firm to slightly cheaper in New South Wales yesterday on the first sale day since the Easter break.

With at least one saleyard sale in every state except Queensland, most centres increased their lamb offerings, except in Western Australia, where rain also held back supplies.

Over-the-hook lamb rates were also generally firm to lower, except in Victoria, and mutton rates were firm, except for Tasmania, where they lifted for 14-24kg cwt sheep.

The ESDI for mutton closed on Tuesday on 300c/kg and the national indicator is on 299c/kg.

In NSW, the NLRS said there were no changes made to over-the-hook lamb and mutton indicators this week. The Easter long weekend has tightened supply, with many contributors taking a wait-and-see approach this week.

In Tasmania, the NLRS quoted over-the-hook lamb rates as 5-15c/kg lower and mutton rates as firm to 10c/kg better.

Forbes’ trade and heavy lambs back $4-$5

The NLRS said the quality of the heavy and extra heavy lambs was excellent. Trade lambs varied, with a few lacking finish. Nearly 5500 Merino lambs were penned. All the usual buyers operated in a firm to slightly cheaper market.

Mutton quality was mixed, but plenty of heavy sheep were offered. Competition was strong and prices were $2-$5 dearer on the better covered lines while light plain sheep lifted up-$10. Medium weights sold from $54-$85 and heavy Merinos made $84-$110.

The NLRS said the quality of the lead lamb drafts in each agent’s run was very good considering the tough season and there was some stand-out pens of extra heavy shorn lambs off red potato country.

Buyer competition was solid on quality export and domestic slaughter lambs and prices trended $1-$4 dearer over the main fat score 3 and 4 categories. Bidding reached a top of $188 for heavy export lambs estimated to have a carcase weight of around 34kg. Extra heavy export lambs weighing 30kg plus mostly sold from $164-$178, with a handful of pens making $180-$188. These lambs were estimated at around 520c/kg.

Select pens of trade weight lambs made up to 580c/kg. Lighter and plainer domestic lambs mostly made from $105-$125, depending on weight and finish, but rates fluctuated. There were restocking orders from East Gippsland, the Mallee and Wimmera as well as local support. Prices were generally firm to noticeably dearer on some of the lightest and smallest store lambs.

The much bigger yarding of sheep was dominated by Merino ewes in varying condition. Like recent weeks, not all the major export buyers operated. The market was firm to dearer, with some significant price rises recorded for lightweight mutton. Prices reached a top of $120 for a small pen lot of extra heavy crossbred ewes. Merino wethers sold to $115 and ewes to $98.

At the South Australian Livestock Exchange at Dublin on Tuesday, the agents yarded 7300 lambs, 1218 more than last week, and 842 sheep, 426 fewer.

The NLRS said the generally very good quality yarding of crossbred and Merino lambs sold to erratic competition. Most of the usual trade and processor buyers attended, but one prominent processor was absent.

A good selection of supplementary fed lambs was offered and extreme heavy weights sold up to $178. Feeders and restockers were cautiously active on light weight lambs and woolly Merinos were in demand. Feeders paid $39-$58 for a large consignment of very light weight Dorper lambs, $50-$70 for light weight crossbreds and up to $102 for heavier crossbreds. Light weight 3 score crossbreds sold to trade and processor buyers, easing $5 to $102-$110, to average 497c/kg cwt.

At the Naracoorte saleyards on Tuesday, the agents yarded 1307 lambs and 722 sheep.

The NLRS said numbers were back around 28 percent due to the Easter long weekend and widespread rain fell in the past week. Prime lamb supplies were small. Plain conditioned drafts suitable for restockers and processors dominated. All buyers were present, but lack of numbers limited activity to some degree.

Prices for better lamb and ewe drafts were firm, with store drafts and wethers similar to recent sales. Very light store lambs sold to restockers for $18-$60. Better framed light lambs suitable for feeders and air freight processors made $60-$98, firming slightly. Lamb in the trade weight ranges made from $80-$115 and remained firm to $1 dearer on average, with the prime drafts lifting $3 to close to 500c/kg. Heavy lambs sold to $123 and were close to $5 dearer on average. Hoggets sold dearer to processors, with better drafts selling to $81.

There were limited numbers of heavy weight ewes in the sheep yarding. Ewe mutton prices were mostly firm and heavier drafts trended firmer. Light weight and conditioned ewes made $25-$52. Medium weight processor mutton were $2 dearer at $50-$65, averaging close to 260c/kg. Better conditioned and heavy weight ewes were also firmer at $55-$75. Restockers were limited and purchased some light weight ewes from $19, with the better drafts selling to $65.

In the northern Tasmanian saleyards Killafaddy and Powranna on Easter Tuesday, the agents yarded 800 lambs, 550 fewer than last week, and 400 sheep, 550 less.