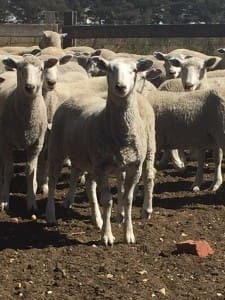 This line of 360 July-August drop composite lambs, 18kg cwt and most score 2 and 3, sold for $106 at Winchelsea, Victoria, on AuctionsPlus last week.

Trade and heavy lambs lifted $2-$5 at the Cowra and Griffith saleyards on Friday, with fewer quality domestic drafts available and most showing dryness, apart from those coming off feedlots.

The ESDI for mutton closed firm on 287c/kg on Friday, but down 11 cents for the week, and the national mutton indicator was unchanged on 288c/kg.

AuctionsPlus’ sheep and lamb offerings continued to increase last week with hot and dry conditions across most areas, although parts of northern and western Queensland received up to 250mm of rain.

Online sheep and lamb numbers increased by 15,000 to 82,715, including two on-farm feature Merino sales. Breeding ewes made up almost two-thirds of the offering. Store lamb listings continued their seasonal decline.

There was strong buyer interest in a larger offering of Merino wether lambs last week, which sold from $44.50-$96.50 to average $64. The top price was for 640 woolly, September drop Roseville Park blood lambs from Narromine. The August-September drop lambs weighed 17.1kg cwt and were mostly score 1. Grown wethers made $65-$82 to average $76.

AuctionsPlus said heavier lambs to slaughter weighing 19-24kg dressed made 477-482c/kg carcase weight including skin value, although with an added freight component from northern NSW and southern Queensland to a Victorian processor, these prices become more in line with current indicators.

The NLRS said lamb quality continued to be mixed. There were some handy lines of finished lambs and the plainer drier types. Most were heavy and extra heavy lambs. Most of the usual buyers competed in a slightly dearer market.

The sheep were mostly Merinos and quality was mixed. Prices remained similar to previous sales with Merino ewes selling from $76-$106. Crossbred ewes sold from $76-$104.

The NLRS said lamb quality was generally mixed. The extra heavy grades were well-presented, while the remainder of the yarding tended to show dryness. Mainly heavy weights were penned, with a limited number of trade lambs and fewer stores. All the usual buyers operated and competition was slightly better resulting in a dearer market.