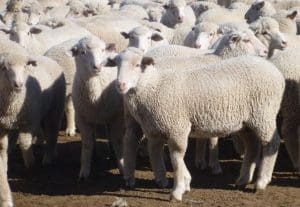 The lamb offering rose in New South Wales over Monday and Tuesday, but continued to fall in Victoria, South Australia and Western Australia.

After Tuesday’s saleyard sale, the National Livestock Reporting Service quoted its main Eastern States Daily Indicators for slaughter lambs as firm to dearer. The lamb ESDIs are: Merino 644c/kg, down 10 cents; light 567c/kg, up 5c; trade 639c/kg, up 2c; heavy 643c/kg, no change. The national trade lamb indicator is up 2 cents to 639c/kg and the heavy indice finished up 1 cents to 644c/kg.

The ESDI for mutton rose 6 cents to 388c/kg and the national mutton indicator is 7 cents higher at 386c/kg.

In New South Wales this week, the NLRS said over-the-hook lamb indicators were unchanged from all contributors. Mutton rates lifted slightly across all weight ranges.

In South Australia, the NLRS said trade weight lamb over-the-hook indicators averaged 620c/kg cwt, while medium weight mutton averaged 344c/kg cwt. Due to a regular contributor not quoting this week, no trend was reported by NLRS.

The NLRS quotes for Western Australian and Tasmanian OTH rates for sheep and lambs were not available when this report was published.

The NLRS said strong markets combined with a week of fine weather to boost the lamb yarding by 7500. It was a good quality yarding with a good mix of trade and heavy weight lambs and more Merinos.

The NLRS said lamb quality was mixed, with wet conditions and supplies continuing to influence yardings. The yarding consisted of mainly good trade lambs, a limited number of heavy weights and some young lambs. Not all the usual buyers attended and others were not active on the heavy weights.

It was a good quality offering of sheep, with most weights and grades represented. Not all exporters operated and heavy Merino ewes sold to $125. Crossbred ewes made to $120 and hoggets sold to $141.

The NLRS said the yarding included a good supply of trade and heavy lambs, but fewer heavy and extra heavy lambs. Quality was good, with some good runs of crop-finished and supplementary-fed lambs, along with some light plain lines. The market was strong, although some sales were slightly easier at times through the sale.

The sheep were mainly light and medium weights, with a few pens of light plain mutton. The market change little, with most sheep selling similar to last week’s prices.

The NLRS said lamb quality continues to be very mixed. There was a handy offering of well-finished lambs and some plainer types. Heavy and extra heavyweight lambs were well-supplied. The usual buyers competed in a firm to dearer market. Agents penned 4100 new season lambs and quality improved.

The NLRS said there was a good supply of trade weight lambs and a larger number of heavy weights. Quality was fairly good, with several consignments of lambs coming off crops. The market was strong, with trade weight lambs selling up to $10 dearer in places, while heavy lambs held firm.

The NLRS said lamb quality improved, with fewer very plain and light weight pens. The usual buyers attended, but not all operated at their usual capacity, with some companies only purchasing limited numbers.

Prices for the best quality old lambs and new season lambs were firm to slightly dearer in places. Secondary and mixed pen-lots of old season crossbred lambs averaged a few dollars easier. Bidding for Merino lambs, which were mostly plainer types, was very erratic at times and showed a big price spread in carcase weight terms for a cheaper result overall.

Buyers were still cautious on skin prices and were working on $3-$7 for most crossbred pelts.

A couple of agents led their sales with new season lambs. These sold to $177.50 for second cross lambs estimated at 25kg cwt. Most of the young trade weight lambs sold from $136-$160 to average an estimated 665c/kg. Some smaller and plainer young lambs made $114-$128.

Sheep varied for an overall weaker result. A feature line of big bare-shorn Merino wethers at over 32kg cwt sold to $123 and some full wool wethers made $125. Heavy first cross ewes sold from $105-$116 and the best pens of heavy Merino ewes made $92-$117. The better runs of mutton were estimated to have cost processors 340-380c/kg.

The NLRS said lamb quality was very mixed. Most of the usual buyers operated in a generally firm to dearer market.

At the South Australian Livestock Exchange in Dublin on Tuesday, the agents yarded 6485 lambs, 1519 more than last week, and 1636 sheep, 2 less.

The NLRS said the usual trade and processor buyers attended and more were active, with increased trade competition. A small number of restocker orders were active. Quality fell with less weight and condition in the offering, but this didn’t stop prices increasing.

The NLRS said more pens of good quality 3 and 4 score trade and heavy weight lambs came forward. Not all the current buyers attended or operated.

The NLRS said the number of new season lambs more than doubled, with some very good drafts offered. Old lamb quality was mixed, with solid numbers of secondary winter-affected drafts and some grain-finished heavy weight drafts. Competition for lambs was back slightly, with light weight lamb processors out of the market and some lamb buyers less active.

The sheep included some excellent heavy weight ewes carrying close to a full fleece. Mutton, wether and ram prices were close to firm. Ewe prices remained close to firm, but weight and quality lifted in the heavy weight categories.

Light weight ewes made $45-$60 and the medium weight 2 score ewes sold $3 dearer at $60-$72. Better conditioned and heavy weight ewes sold from $60-$104, remain equal in price per head but cheaper on a cwt basis. Restockers were able pick up some good young and mature ewes for from $65 up to $98 for lines with close to full wool.