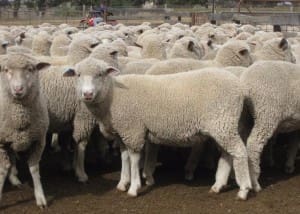 Griffith yarded more lambs on Friday than last week, but Cowra’s numbers continued to decline and AuctionsPlus also reported lower offerings after rain across much of eastern Australia.

The National Livestock Reporting Service quoted the Eastern States Daily Indicators for most lamb categories as around firm, finishing a week of significant gains for most slaughter and crossbred restocker lambs.

The ESDI and national mutton indicators both finished down 1 cent on 341c/kg.

The NLRS said lamb quality reduced, with more plainer, drier lambs penned along with a few well-finished lines. Heavy and extra heavyweight lambs were again well-supplied, along with a quality offering of Merinos. The usual buyers competed in a market that was firm to dearer on a plainer offering.

The NLRS said lamb quality slipped. The supplementary fed lambs were in good condition, but the remainder of the yarding tended to lack finish. There were reasonable numbers of heavy weight lambs, some handy runs of trade weights and more store drafts. Competition was solid from the usual buyers, particularly for the 23-24kg cwt lambs.

Sheep quality was mixed and most grades were dearer. Heavy first cross ewes were $7 dearer and averaged $102 or 293c/kg cwt for the 4 scores. Medium weight Merino wethers sold from $68-$86, up $11.

AuctionsPlus sheep and lamb numbers dropped by 3713 to 37,617 last week after the relief of much needed rain the previous weekend.

First cross ewe lambs sold to $111 last week, for a line of 335 lat January shorn August-September drop lambs from Yendon in Victoria that weighted 30.4kg lwt and were mostly score 2. A line of 138 late March-shorn June drop White Suffolk-Merino cross ewe at Concongella in Victoria sold for $10. They weighed 52.7kg lwt, were mostly score 3 and scanned 124pc in lamb to Poll Dorset rams.

Composite ewe lambs sold to $150.50 for a line of 310 late January shorn August-September drop ewes at Nhill in Victoria. The lambs weighed 56.2kg lwt and were mostly score 3.