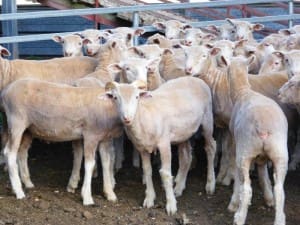 SALEYARD lamb prices fell further mid-week as processors with adequate direct supplies were able to be selective despite smaller yardings.

Prices for domestic and heavy lambs were only quoted as firming for some better grain or lucerne-finished lines and generally lower at all centres across Victoria and New South Wales.

Despite the forced sell off of lambs in many areas due to continuing dry conditions, and especially in New South Wales, with the lack of quality trade lambs available, domestic processors are pushing harder into heavier weights.

Mutton prices were firm to dearer at most centres, except in Tasmania, with heavy crossbred ewes lifting $18 to average 330c/kg at Wagga in New South Wales and very light sheep rates rising by up to $10-$14 at Hamilton in Victoria. Mutton prices rose $5-$10 at Katanning in Western Australia.

Landmark Wagga livestock manager Peter Cabot said hook and saleyard rates for lambs had come back in the past three weeks, with most lambs now making under 500c/kg cwt.

“There are a lot of lambs getting sold – it is pretty bloody dry through the Riverina, very ordinary.

JM Ellis and Co auctioneer Robert Pike said although Hamilton was not yarding many lambs, big numbers were coming onto the market in New South Wales, especially last week at Wagga, where more than 41,000 lambs were yarded.

“A lot of our lambs were sold earlier because our green crops haven’t been anything special – it’s been hand-to-mouth stuff really.”

He said many of the area’s store lambs were sold to northern restockers in November-December last year and these were now hitting the market.

“Our good quality lambs are few and far between; each agent has a few pens and they drop away to fairly ordinary ones very quickly.”

The ESDI and national indicators for mutton were down 5 cents to 313c/kg.

The NLRS said the mixed yarding included a few pens of heavy weight lambs and a fair selection of trade weights. Lambs suitable for the restockers and fatteners were well-supplied.

The mostly plain quality yarding of mutton had only odd pens of properly finished sheep. Light weight sheep sold firm and the few better conditioned lines were $2-$5 dearer. The 2 score ewes sold from $30-$66. The better 3 and 4 score Merinos made $62-$95 and crossbred sold for $93. The restockers paid to $102 for woolly Merino ewes. Merino wethers sold to $110.

The NLRS said the dry seasonal conditions impacted on the condition of lighter weight categories. The quality of the heavy lamb offering was very good with most lambs either supplementary fed or finished on lucerne. Not all buyers operated fully, with major domestic processors selective when making a purchase.

There were fewer store orders, with most restocker buyers coming from the Riverina. Grain fed trade lambs attracted premium prices as buyers opted to bid on high yielding pens.

Prices for the limited supplies of finished trade lambs firmed as the market progressed, but generally eased $3. The better finished 22-24kg lambs sold from $115-$136, averaging 494c/kg.

Merino trade lambs were keenly sought, with good numbers in full wool. Merino trade lambs sold from $102-$134. Lighter weight lambs suitable to restock or feed sold to fewer buyers. The best price for lambs to be fed on was $116.40, with most making $69-$107.

Despite good numbers of excellent quality grain fed heavy and extra heavy lambs, prices were generally $3-$4 cheaper. Heavy lambs on many occasions fluctuated widely, hitting a low of $125 before gaining some momentum to average 494c/kg. Extra heavy lambs sold to weaker demand, with one processor dominating the market on lambs weighing above 30kg. Sales ranged from $131-$180, to average 470c/kg.

The NLRS said lamb quality was poor to good. The many medium trade weight 2 and 3 score lambs varied from ideally covered domestic market lines to drafts not quite finished. Prices overall were easier for lambs, with the heavy weights $2-$3 cheaper, medium trade $1-$2 lower and the light trade lambs unchanged. The lighter 1 and 2 score store lambs sold mostly firm, but some isolated sales were up to $10 cheaper. The usual buyers attended, but not all were active and there was less competition throughout the sale.

The NLRS said lamb quality was average to good. The usual buyers operated in a cheaper market.

Light store crossbred lambs sold to restockers and feeders made from $19 and the almost finished or bigger frame lambs sold to $106. Merino store lambs sold from $50 for the plainer lambs up to $88 for better quality drafts.

In Queensland at the Warwick saleyards on Wednesday, the agents yarded 1341 lambs and hoggets, and 606 sheep.

In a similar yarding of sheep and lambs, the market was quoted as firm for all descriptions. The to-priced lambs made $131 for N.C. and S. Henman of ‘Great Oaks’, Nobby.

At the northern Tasmanian saleyards at Powranna and Killafaddy on Tuesday, the agents yarded 1900 lambs, 300 fewer than last week, and 1120 sheep, 630 less.