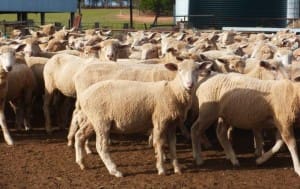 SLAUGHTER lamb prices fell further in saleyards this week as dry conditions continued across most of the eastern states.

Quality lambs held firm, but secondary and plainer lambs in most categories, including restocking lines, were discounted.

Despite lamb yardings falling in most centres, processor interest in trade and heavy lambs was not as strong and especially in Victoria.

At the Bendigo saleyards on Monday, the National Livestock Reporting Service said competition eased and some lamb buyers didn’t purchase their usual numbers amid reports many meatworks have good supplies around them.

After Tuesday’s saleyard sales, the Eastern States Daily Indicators for most lamb categories fell, except for Merino lambs. The lamb ESDIs are restocker 524c/kg, down 6c; Merino 466c/kg, up 2c; light 495c/kg, down 5c; trade 510c/kg, down 4c; heavy 501c/kg, down 3c. The national trade lamb indicator closed 6 cents down on 508c/kg and the heavy indice finished 3 cents low at 500c/kg.

In South Australia, the NLRS quoted over-the-hook lamb rates as declining in all categories week-on-week, with trade and heavy weights down an average of 13c/kg cwt. There were some slight upward adjustments to medium and heavy weight mutton indicators.

The NLRS said the continuing dry conditions found just over 1000 extra lambs. Some excellent heavy weight lambs were yarded, along with a reasonable selection of trade weights. There were also good numbers of light weight Merino lambs and hoggets all being sold due to the dry conditions.

Most grades were represented in a mixed yarding of mutton. The plainer conditioned light weight sheep sold firm, while the better medium and heavy weights were $4-$6 cheaper. The 2 score ewes sold from $35-$68. The better 3 and 4 score Merinos sold from $54-$116 and the crossbreds made to $110. Merino wethers sold to $115.

The NLRS said the quality and condition of the lambs was very mixed. There was a good number of well-finished heavy lambs and restockers were well catered for, but a limited supply of well-finished trade weights. The usual processor and trade buyers attended and there was increased restocker competition, both local and from outside the region.

A large percentage of the grown sheep were light weights and plainer in condition. There were limited supplies of well-finished medium and heavy weights. Market trends were also cheaper, with the good quality well-finished sheep least affected.

The NLRS said lamb quality reduced slightly from the previous sale, with a higher percentage of plainer drier lambs. Heavy and extra heavy weight lambs were well-supplied. The usual buyers competed in a firm to easier market.

The NLRS said there were fewer heavy export lambs and the quality and condition of the domestic drafts was similar to last week. Competition eased and some lamb buyers didn’t purchase their usual numbers amid reports many meatworks have good supplies around them.

The market fluctuated; opening cheaper before improving. This resulted in mixed price trends, with the best trade weight lambs often similar to last week, but the general run of slaughter lambs sold $2-$4 easier. The limited selection of extra heavy export lambs was discounted, reaching a top of $163. Competition for extra heavy lambs over 30kg cwt remained easier and there was only a handful of sales over $160.

Bidding for light weight lambs was not as strong from either processors or restockers and they sold to easier trends. The plainest and smallest store lambs recorded the biggest price corrections due to the absence of some regular store buyers that usually support this end of the market. Merino lambs sold according to quality and fat cover and averaged lower overall.

The sheep sale was mostly firm to dearer for the main lines of crossbreds and Merinos. One export company which hasn’t operated on mutton for some time rejoined the market on leaner grades of trade weight Merino ewes, helping drive a $3 lift to an average of 335c/kg cwt for pens in the 18-24kg range. Heavy Merino wethers topped the sale at $118 and extra heavy crossbred sheep sold from $90-$106.

The NLRS said another average to good quality lamb yarding was offered to the usual buyers.

The NLRS said the very mixed quality yarding of crossbred and Merino lambs sold to generally easing competition. Several trade buyers and one processor didn’t participate and prices fluctuated throughout. Restockers and feeders were more prominent than in recent weeks and bid strongly on suitable light weights.

The NLRS said lamb quality and type was very mixed and these sold to a larger field of trade and processor buyers, with more restocker orders also operating. There were a large number of shorn store lambs and there was strong competition on these.

The offering received varying amounts of competition, with not all of the buyers fully active across the yarding. This led to the lamb price holding firm.

The NLRS said wide spread rain across the south west led to numbers easing slightly, with light store lambs and secondary trade weight lambs dominating the yarding. Lamb quality continued to be mixed throughout the categories. There was a moderate number of prime trade lambs, but most secondary or store drafts, with numerous very light Merino drafts.

All sectors of the market were active with competition for restocker lamb drafts increasing and extra mutton buyers lifting ewe prices. Trade lambs and wethers remained close-last week’s levels. Prices moved higher as the sale progressed with a late push for numbers evident. Very light store lambs, mostly Merinos, sold between $13 and $65-be mostly dearer by close-$5. Light lambs suitable for air freight processors or feed sold between $55 and $96 and were also up $5 or more. Demand for trade weight lambs was restricted with solid direct-processor deliveries. Prime trade lambs made $90-$110 and averaged 460c/kg . Secondary drafts were purchased by feeders and averaged close-450c/kg . Heavy lambs were limited in number with a top price of $110 paid.

The ewes included a reasonable quantity of heavy weights along with trade mutton and light conditioned drafts. Ewe mutton competition increased with more buyers operating. Light weight ewes averaged close to $48.50 to be almost firm. Medium weight processor mutton was firm to $3 dearer at $52-$75, or 284c/kg. Better conditioned and heavy weight ewes also lifted $3-$5 to $62-$85. Dearer ewes had skin values up to $15.

Wether prices remained similar with limited live export orders. Export wethers made $80-$92 and the feeders and restockers paid $70-$104 for suitable wethers. Dearer drafts had skin values of more than $12. Light weight wether drafts, including some wether lambs, sold to restockers for $45-$75, with this segment of the market lifting on last week. Rams sold to export feeders made $25-$70, with ram lambs reaching a top of $90. Old rams sold for $10-$35 to processors.